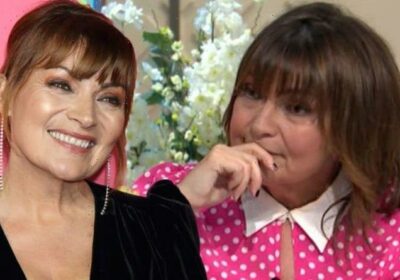 Earlier today, KSI, best known for his sensational YouTube career and appearing on Celebrity Gogglebox, left Lorraine Kelly speechless during an appearance on her self-titled ITV programme. It comes after fans of KSI, whose real name is Olajide ‘JJ’ Olatunji, gifted the star with a Lady title.

I wish to be known as Lady Lorraine forevermore.

During her final show before enjoying a long summer holiday, Lorraine was chatting to the musician, who today released his debut album – All Over The Place, when she joked that she should bow before him.

The pair have become close over the years, with KSI, 28, previously appearing on the ITV mid-morning programme several times.

KSI has made it no secret that he is a fan of Lorraine, admitting that he had a “shrine” for the Scottish broadcaster.

Now, it seems as though their friendship has gone to the next level.

Speaking to Lorraine, 61, KSI said: “Obviously the last time we were here, we talked about me being a Lord, a fan made me a Lord.

“That is why I have decided to make you a Lady.”

The stunned presenter exclaimed: “Have you got the power to do that? Have you?”

After reaching to the side of her seat, Lorraine was left in a state of disbelief as she picked up the gift that had been placed there before the interview.

“I want you all to genuflect, curtsy please – all of that,” before laughing.

After KSI suggested that staff working on Lorraine’s programme bowed before her, she joked that it would be nothing out of the ordinary.

“Well they do that anyway, KSI, they know that, they did that when you came in,” she admitted.

Sharing her gratitude, Lorraine went on to add: “You are gorgeous, I can’t believe you’ve got the power to do that for me — oh, look at that!

“The Lords of the United Kingdom of Great Britain and Northern Ireland, I love it, I’ve even got a crest, so we’re now Lord and Lady.”

Elsewhere on the programme, it was revealed that Lorraine would be participating in KSI’s global broadcast tomorrow evening.

To celebrate the release of his album, the YouTuber will be hosting a virtual event with guest stars, surprise performers and dancers.

Joining him will be names such as Lorraine, Jonathan Ross, Jack Whitehall, Logan Paul and footballing legend, Emile Heskey.

In a statement shared with Express.co.uk, he said: “No one will honestly expect this. This is a once-in-a-lifetime experience. Never done before.

“Your boy is gonna take you all on an adventure that will be remembered for years to come.”

He continued: “I’ll be taking you through my journey from being a YouTuber to a boxer to a musician and more, this experience has everything.

“Mainstream meets the internet in a way never done before.”