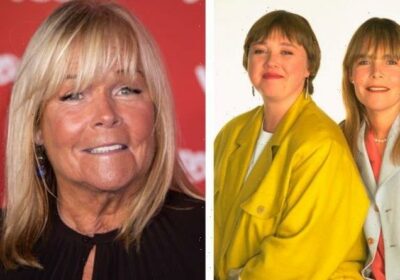 In May, it was reported that ITV had cancelled plans to commission a brand new series of the iconic sitcom due to Pauline’s decision not to reprise her character as Linda Robon’s on-screen sister, Sharon Theodopolopodous.

She had already been absent from the Christmas special last year, leaving Linda and Lesley Joseph to appear in the reunion episode alone.

And while ITV remained hopeful that Pauline would have a change of heart — since her husband and manager Steve Sheen was reportedly open to the idea of negotiating a deal for her return — in the end, she decided to scrap the move altogether.

During an interview with The Sun at the Clifford The Big Dog premiere on Sunday, Linda gushed that she would be open to working on a follow-up to last year’s Christmas reunion.

The Loose Women star, who landed her big break playing the role of Tracey in the BBC programme from 1989 to 1998, is welcoming the idea of reprising her character, though it’s still unclear whether Pauline will want to join.

Earlier this year, a source told The Mail On Sunday that ITV’s decision to cancel the show’s return was because its third lead star refused to take part.

“Without Pauline, the view is that there is no Birds Of A Feather,” the insider explained.

“You cannot have Tracey without Sharon, and there is no way Pauline will be going back. Things are bad between her and Linda.

“Linda and Lesley gave it a go but, despite the figures being good, ITV won’t be recommissioning it.”

While Linda told Express.co.uk that Pauline wasn’t part of the one-off special because she wanted to concentrate on other things, such as her academy, rumours had begun swirling that a colossal rift broke out between the two, causing their friendship to fall apart.

According to The Sun, the actresses have shared a string of contentious rows behind the scenes, with their last argument being so intense, it allegedly made Linda want to cut all ties with her ex-colleague.

“The nadir came during one astonishing row at Teddington Studios, culminating in Pauline and Lesley squaring off, noses centimetres apart, outside the women’s loos,” the source said.

“They were basically pulled apart by stunned crew members. Things went rapidly downhill from there.

The publication further claimed that Pauline had gotten “jealous” of Lesley’s success on the show, making it clear that the chemistry the three women once shared had fizzled out.

“I think Pauline resented the attention that Lesley got and it was very tense and difficult to navigate at times,” the insider continued.

Both Linda’s and Pauline’s reps were contacted by Express.co.uk at the time.

Linda and Pauline began working together on the 1970 film Junket 89 before co-starring as best friends on Birds of a Feather.

Lesley also appeared to hint at a feud with Pauline when she posted a photo of the cast on her Instagram to promote the 2020 Christmas special, with Pauline notably cropped out of the throwback snap.

And when Linda posted a “Galentine’s Day” tribute to her female friends, while Lesley appeared in the photo, Pauline, again, was nowhere to be found, making it apparent that things aren’t looking great for fans who hoped to watch all three women together on TV again.

Last year, Linda asked fans to “respect” Pauline’s “choice” not to return for the Birds of a Feather reunion special.

Since ITV’s decision to cancel plans for another special, there have been no further talks about bringing the show back anytime soon.

Pauline has yet to comment on reports concerning a feud with Linda and Lesley.