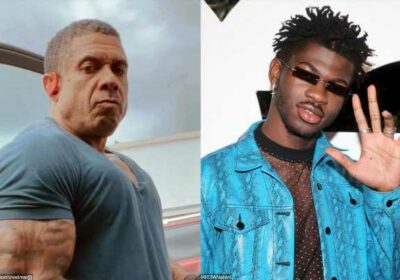 Meanwhile, the ‘MONTERO (Call Me by Your Name)’ hitmaker apparently is unbothered with Madonna’s response to his gig, assuring fans that it was ‘just a joke.’

AceShowbiz –Lil Nas X has laughed off Benzino‘s criticism over his BET Awards kiss with his dancer. Just one day after the “Love & Hip Hop: Atlanta” star dubbed his stunt “lame”, the “MONTERO (Call Me by Your Name)” hitmaker poked fun at him, calling him “hilarious.”

Making use of Twitter on Wednesday, June 30, the 22-year-old responded to an article about Benzino complaining about his performance. He tweeted, “i’m sorry but the thought of n****s sitting their kids down in the living room and telling them gay people exist is so hilarious to me.”

One day earlier, Benzino wrote in a since-deleted Instagram post, “That s**t BET pulled yesterday was lame asf.” He added, “It was too uncomfortable, too irresponsible, too forced and too irrelevant to the awards. Homie ain’t even hot like that for music anymore anyway. It’s a shame what all this is comming too. I wish I has the backing to bring the Source Awards back.”

“I bought ol town road for ZINO, he knows every word but all the satanic s**t I’m just not with. I mean, how do you explain s**t like this to your kid?” the father of Coi Leray emphasized further. “I got nothing but respect and love for the gay community but that ain’t it, I could see if he was pooping but it was unexpected and unnecessary.”

“I didn’t care for the Madonna kiss either. I could see if they way dating. Now I hope I don’t offend anyone because this post wasn’t meant for that,” he then concluded. “It’s just my opinion of the production. Only God judges.”

Benzino was not the only celebrity reacting to Nas X’s performance at the BET Awards 2021. On Tuesday, the “Material Girl” songstress shared on Instagram Story two photos comparing the rapper’s kiss to her own famous lip-lock with Britney Spears from their 2003 MTV Video Music Awards performance. Alongside the snaps, she boasted, “#diditfirst.”

Madonna’s joke, however, was not taken lightly by some internet users. One user in particular penned on Twitter, “right but she did it as a straight woman fetishizing wlw relationships while lil nas is an openly gay man at the BETs which had a largely homophobic demographic…. they r not the same.” Another pressed, “Why is Madonna like this? It is so unnecessary.”

Lil Nas X assured fans that he and Madonna are friends.

While people were upset with Madonna’s post, Nas X apparently was unbothered with it. He tweeted on Wednesday, “Me and madonna are friends. it’s just a joke.”