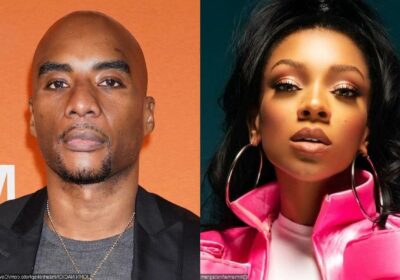 While responding to the radio host’s recent interview, the rapper/actress slams him for making her cry in an episode of ‘The Breakfast Club’ back in 2011.

AceShowbiz –Lil Mama never forgives and forgets. While responding to Charlamagne Tha God‘s recent interview, the rapper/actress slammed the radio host for making her cry in a past episode of “The Breakfast Club”.

Lil Mama took to an Instagram comment section to call Charlamagne out underneath a post about his interview with Fat Joe on his Comedy Central Show, “Hell of a Week“. In the interview, they talked about the death of PnB Rock, one of the rappers who fell victim to gun violence. “It’s so dangerous to be a rapper these days. It’s the hardest job out there right now, because they comin’ at you either way. Either way, they tryin’ to put you in jail, or your own people tryin’ to kill you,” said Joe.

Upon watching the sit-down, Lil Mama was not impressed. “@cthagod is a b***h a** n***a too,” she wrote. “Why, because when I review the tapes on how he tried to trick me, a black young successful woman from the bottom, out of my spot. He actually goes on the list with the cops, killers, fed and other haters.”

“Jealousy is a MF, and it be your own people. Gotta secure yourself though. Joe dropped a lot of Gems. Hope y’all listening,” she concluded.

Lil Mama guested on “The Breakfast Club” back in 2011. While things started smoothly for the rapper, she broke into tears as the hosts started to talk about touchy subjects.

The “Take Me Back” raptress returned to the radio show nearly five years later as she discussed the infamous interview. “I don’t regret anything because I feel like anything that I’ve been through is a part of who I am right now. It’s all a part of my growth,” she shared at the time.

“What I did learn was how to roll with the punches a little better, because at times I would get knocked down and I’d stay down… So I really had to build that backbone,” she continued.