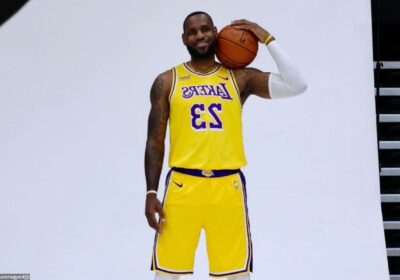 Having been ejected from the game, a female fan makes a pouting face and crybaby motion in the Los Angeles Lakers stars’ direction as she’s making her way out.

AceShowbiz –LeBron James won’t tolerate any negative comments about him. During his team’s overtime victory in a game against the Indiana Pacers, the Los Angeles Lakers star got Pacers fans kicked out from their court side seats at the Gainbridge Fieldhouse.

In a video surfacing online, the athlete was seen bringing referee Rodney Mott over to the sideline as he pointed his fingers at the two fans. Arena officials then approached them, telling the man and the woman to leave the court.

While making her way out, the female fan made a pouting face and crybaby motion in James’ direction. Her companion, meanwhile, seemed laughing while walking behind her.

It remains unclear what the fans said to James. However, the 36-year-old basketball player described their actions as “outside the line with obscene gestures and words.”

“When obscene gestures and language come into it, (it) can’t be tolerated,” James said after the Wednesday night, November 24 game. “There’s a difference from cheering for your team and not wanting the other team to win and things I would never say to a fan and they shouldn’t say to me.”

This was not the first time James got fans ejected. When playing against the Atlanta Hawks in February, he got four fans escorted out following a confrontation. One of the fans, Juliana Carlos, explained that her husband and James had an argument during the Lakers’ win over the Hawk. When she tried to defend her spouse, she told James, “Don’t f**king talk to my husband like that.”

Lebron then addressed the incident in a post-game press conference. “They might have had a couple drinks, maybe,” he assumed. “And they could have probably kept it going during the game, and the game wouldn’t have been about the game no more, so I think the referees did what they had to do.”