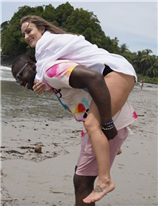 Only a few days ago, Internet users met Jaylan Mobley for the first time.

This past Friday night, Leah Messer surprised fans when she uploaded a photo of herself receiving a romantic kiss on the cheek from a then-unnamed stud muffin.

We’ve since learned his identity, and we’ve also learned that the aforementioned photo may have been social media’s introduction to Mobley…

… but Leah’s daughtes were introduced to Mobley a short while ago.

“Leah and Jaylan Mobley have been dating for a few months now,” a source recenty told E! News.

“He recently met Leah’s girls and they get along great. Leah is very happy and the relationship has been a great surprise.”

You don’t need to take the word of this anonymous insider, however.

You can see Mobley hanging out with Messer’s daughter’s right here, down below!

A rep for the long-time Teen Mom 2 star has also confirmed this romance, stating after Messer started to share photos of Mobley online:

“Leah is excited about becoming exclusive with Jaylan, and they both are enjoying their time with each other.

“While she has been nervous in the past about introducing someone new to the girls, the meeting went really well.”

Mobley is hanging out with Leah’s kids here in West Virginia, while Messer previously told Entertainment Tonight that Jaylan accompanied her this summer to Costa Rica, which is where the pair decided to get together in serious fashion.

“We met through a project Jaylan did with ESPN and the Army that was filmed and captured by one of my PA’s in September 2020,” Messer explained to this outlet.

“In growing my network, I followed Jaylan, and in February of this year, we connected through DMs and he asked me on a date.”

The pair went to dinner and then a Wiz Khalifa and it was an “amazing” first date, Leah gushed to ET.

Mobley, 25, is a First Lieutenant in the U.S. Army and a member of the West Virginia National Guard.

He hails from Charlotte and doesn’t have any kids — yet he seems to know exactly how to act around them.

“They connected so well that initially it scared me, but I want my girls to see who is making their mama smile,” Messer told ET, adding:

“My heart can’t take this.

Things are obviously going extremely well at the moment for Messer and Mobley.

“We happy—that’s all,” Leah wrote on Instagram as a caption to the couple holding hands this week.

Messer debuted on MTV’s 16 and Pregnant in 2010 when she was expecting twin girls with then-boyfriend Corey Simms.

Alli and Gracie are now 11 years old, while 8-year-old Adalynn was born to Leah and ex Jeremy Calvert in 2014.

“At the end of the day, Jaylan is such a great person and I know he’ll be such a positive influence in my daughters’ lives,” Leah added to Entertainment Tonight.

“They love him, and that’s what I needed to know before introducing them all.”

She concluded in that interview:

“When Jaylan started checking all the boxes and characteristics that I had been looking for in a partner, I won’t even lie, I was taken aback.

“He’s so compassionate, caring, patient, kind, thoughtful, has a great sense of humor, is adventurous, and LOVES kids. I swore he wasn’t real!”