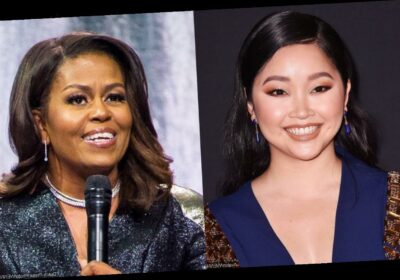 Aside from talking about her feelings of not belonging, the leading lady of ‘To All the Boys I’ve Loved Before’ also spills on the time she stalked David Beckham around a supermarket.

AceShowbiz -Actress Lana Condor has shared about how she owes America’s former First Lady Michelle Obama a big time. The actress reveals in a new interview that the wife of Barack Obama helped her get past her imposter syndrome fears.

The “To All the Boys I’ve Loved Before” star admits she constantly had to pinch herself after landing a leading role in the Netflix film franchise and even on set, she battled feelings of not belonging among her castmates.

“Michelle Obama talked a lot to me about the idea of imposter syndrome – that feeling that you don’t belong and that you haven’t earned your place in a room,” Lana tells E! News. “I’m surrounded by these amazing, amazing people. I keep reminding myself, ‘This is a real thing, and I deserve to be here. And I’ve worked hard to be here’.”

“But I don’t care how old I’ll get, or whatever I’ve done in my life, I’ll always be floored and honoured and grateful to be able to be in the Library of Congress. And to be able to present (an award) to someone like (Indian activist) Priti Patkar. I don’t care, I could be one million years old and still be like, ‘What? I can’t believe it’.”

But she hopes she never loses her ability to be a dorky fan, revealing she once stalked David Beckham around a supermarket.