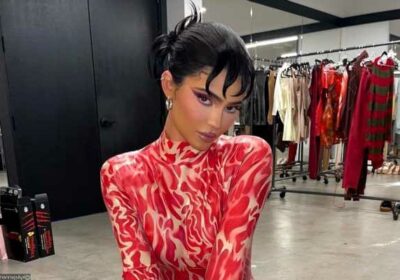 The former ‘Keeping Up with the Kardashians’ star is accused of blackfishing after sharing a video, in which her skin tone is seemingly darker than her natural color, on her social media platform.

AceShowbiz –Kylie Jenner has come under fire for her appearance. The former “Keeping Up with the Kardashians” star was accused of blackfishing after she showed off her extreme tan skin.

On Sunday, October 24, the Kylie Cosmetics founder posted a selfie video of herself, in which she flaunted her darker skin tone, on her Instagram Story. After online critics found her skin tone was seemingly darker than her natural color, the 24-year-old reality star was accused of blackfishing, a term describing someone who is pretending to be black by changing their appearance.

Other Twitter users also compared Kylie’s situation to the recent fan outrage experienced by former Little Mix singer Jesy Nelson. “Kylie and Jesy fighting to see who can be the queen of blackfishing omg,” one sarcastically wrote.

“So y’all get mad at that Jesy Nelson girl for ‘blackfishing’ but nobody says anything when it comes to Kylie??? I’m just confused,” a critic chimed in, while another penned, “She actually looks black, way darker than Jesy.” A separate user added, “Not selective outrage Twitter being dead silent while Kylie is ‘blackfishing’ Where was the energy you had two weeks ago with Jesy? Maybe it’s influenced outrage.”

Back in August 2020, Kylie received a similar accusation of blackfishing after she called herself “brown skinned girl” in a caption of her Instagram post. After facing online backlash, the reality star changed the caption into, “Brown eyed girl.”

A separate critic fumed in a lengthy comment that read, “Y’all done let these culture vultures get away with so much s**t this h** think she a brown girl.. hoe u is white.. a genetic mu f**kin tation.. changed the caption but b***h it was caught!! Tired of this whole family #KylieJenner black men leave these h**s alone!” Another summed up fans’ outrage, writing, “WHY IS HER SKIN COLOR LIKE THAT?”