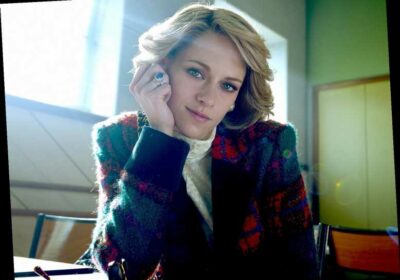 Kristen Stewart is in complete character as Princess Diana — down to her accessories.

A new photo of the actress, 30, as the late royal in the upcoming movie, Spencer, was released on Thursday as filming for the Pablo Larraín-directed film heads from Germany to the U.K.

The shot shows Stewart looking straight into the camera with her head resting on her hand, which is adorned with a replica of Princess Diana's sapphire and diamond engagement ring. Diana's oldest son Prince William later proposed to Kate Middleton with the famous ring, which Kate still wears.

NEON released the first look of their star in full costume in January, showing Stewart's strong resemblance to Diana in a red coat, blonde locks and a black hat with delicate netting over her face as she looks off to the side. The film, which is eyeing a fall 2021 release, is set over the course of a weekend in December 1991, when Princess Diana joins the royal family for Christmas as the Sandringham Estate — and decides to leave her fractured marriage to Prince Charles.

Get the premiere issue of PEOPLE Royals for glamorous new photos and inside stories royals fans haven't seen or read elsewhere! Subscribe at peopleroyals.com/launch "Spencer is a dive inside an emotional imagining of who Diana was at a pivotal turning point in her life," said Stewart. "It is a physical assertion of the sum of her parts, which starts with her given name; Spencer. It is a harrowing effort for her to return to herself, as Diana strives to hold onto what the name Spencer means to her." During a November appearance on Jimmy Kimmel Live!, Stewart recalled the flowers laid in Princess Diana's honor at Buckingham Palace after she died in 1997.

"I was really young, [I] didn't know what was going on," the Twilight actress said. "It's hard not to feel protective of her. She was so young."

"I mean, everyone's perspective is different and there's no way to get anything right because what is fact in relation to personal experience," she continued.

"My movie takes place over three days, and it's this really poetic internal imagining of what that might have felt like rather than giving new information," Stewart said. "We kind of don't have a mark to hit, we just also love her."