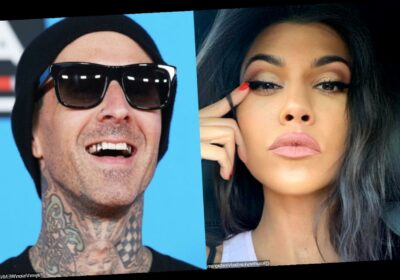 The ‘Keeping Up with the Kardashians’ star makes her relationship with the Blink-182 drummer Instagram official, days after fueling the rumors with their cryptic Valentine’s Day posts.

On Tuesday, February 16, the mother of three posted on her account a photo of her hand intertwined with the rocker’s tattooed hand. While the 41-year-old left it captionless and let the picture speak for itself, her beau commented underneath the image with a black heart emoji.

Her lifestyle brand Poosh chimed in as writing in the comment section, “We’re feeling this.” Kourtney’s pal Addison Rae simply wrote, “THIS,” as many other followers, including Miranda Kerr, expressed their joy over the confirmed relationship. “When friends become lovers,” Khadijah Haqq added.

Kourtney and Travis had been friends for years before their dating rumors sparked anew in mid-January after the Blink-182 drummer was seen leaving comments on several of the Poosh founder’s Instagram posts. They added fuel to the speculations a few days later when they posted pictures of poolside views that were believed to be taken at her mom Kris Jenner‘s home in Palm Springs, California.

The two were later spotted enjoying a PDA-filled date night on Tuesday, February 9, during which they were getting playful. The TV personality and the 45-year-old rocker were seen sitting across from each other and playing a cheeky game of thumb wars during the dinner at Japanese restaurant named Matsuhisa in Los Angeles.

On Valentine’s Day, the new lovebirds hinted that they spent the special day together with their Instagram Story posts which featured the same fireplace. Aside from the fireplace post, Kourtney shared a handwritten poem that read, “Roses are red/ Violets are blue/ Garlic Bread/ Blink-182.” Travis, meanwhile, posted a snap of a woman’s leg adorned with a diamond ankle bracelet. Many believed the leg belonged to the older sister of Kim Kardashian.