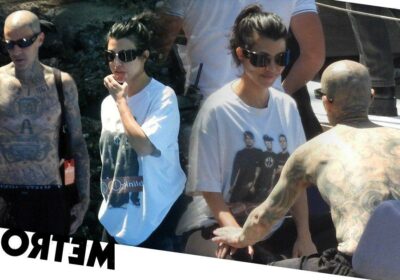 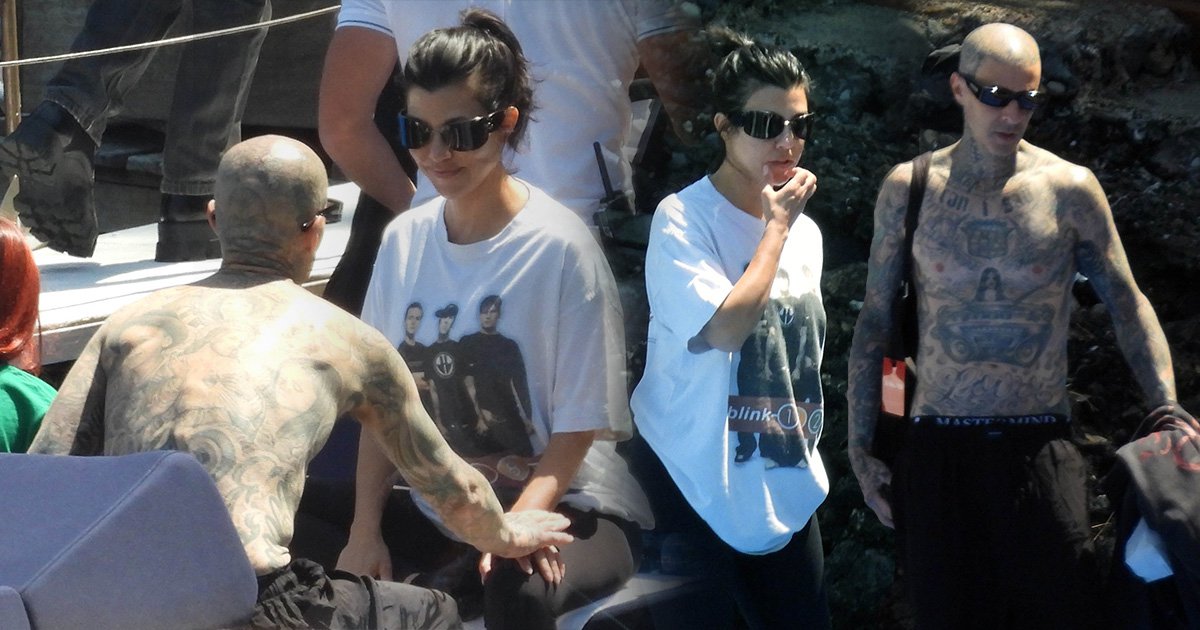 Kourtney Kardashian proved to be a very supportive wife as she donned a T-shirt adorned with Travis Barker’s face, ahead of their wedding.

The Kardashians star and Blink-182 drummer officially tied the knot in a low-key ceremony in Santa Barbara last weekend, and are thought to have rented a castle in Italy for their upcoming nuptials.

Ahead of their big day, the pair were spotted making the most of the sunshine and glamorous surroundings on a family boat ride in Portofino.

The bride, 42, went for a casual look for the day, opting for a white top proudly showing her husband’s band, and black leggings.

While her beau, 46, went topless for the journey, showcasing his huge collection of tattoos.

The lovebirds were joined by Kourtney’s three children, Mason, Penelope and Reign, for the outing – which comes just before they are due to walk down the aisle again.

According to reports, they have spared no expense for the ceremony, and have rented out the super swanky Castello Brown to commemorate their romance.

Their celebrations are thought to be spanning four days, TMZ reports, with Khloe and Kim Kardashian, and Kendall and Kylie Jenner making their way to Italy – along with momager Kris Jenner and her boyfriend, Corey Gamble.

Scott Dicisk reportedly didn’t make the cut, but Travis’ kids and Blink bandmates are thought to have nabbed an invite.

As well as the wedding, which will be their third ceremony, it has been claimed that Kourtney and Travis – dubbed Kravis – are throwing a huge reception party in LA.

The duo made their relationship official last year and announced their engagement in October.

After a ‘practice’ ceremony in Las Vegas, they got legally married in Santa Barbara just a few days ago – blessing fans with photos from their big day on Instagram.

Sharing a selection of snaps, the mom-of-three captioned the upload: ‘Till death do us part.’

They are also planning to start a family together, with cameras for the family’s Hulu show on hand to capture their IVF journey and doctors appointments.

‘The more kids, the merrier. It’s more people to love,’ Kourtney said of blending their families together. ‘I am really close with Travis’ kids and I love them and it’s a beautiful thing.

‘Travis is a really amazing father. It’s one of the reasons that I fell in love with him. He is very, very patient.

‘I think because we’ve all known each other, it does make it easier to blend our families. It’s all I could ever want.’