The Kardashians had a super meta moment during Thursday’s new episode, when Kourtney Kardashian sat down and slammed the show for enabling an old narrative about her, Scott Disick, and Travis Barker.

Speaking to her friend Stephanie Shepherd, Kourt explained that she and Travis “film and have the best time ever, and then we’ve been watching the edits and we’re just so annoyed because they’re like swirling us in with this drama.”

She noted that the engagement episode was particularly annoying, because “editors, or whoever, are taking it as like, let’s take Kourtney, she’s the chosen one to be the drama.” 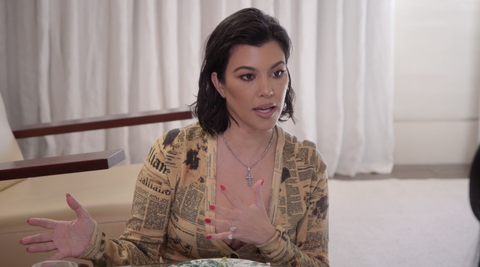 She added on the night of her engagement, “I wasn’t like god everyone’s such fucking assholes for bringing up this, ’cause it wasn’t a part of the night. It was like two seconds of the night. I didn’t even remember it until I saw the cut of the episode. It wasn’t like 50 percent of the night like it’s made to look be on like an episode.”

Kourt said she wanted drama about Scott to be taken out and put in the next episode to give her and Travis “respect,” and elaborated further during an on-camera interview.

“While shooting our show we are all executive producers so we get to see cuts of the show, and give notes on episodes, and make sure that our stories are being told. I am in one of the best places that I’ve ever been in my life, and it’s time for our show to catch up,” she said. “It’s enabling this old narrative, and buying into something that just doesn’t really exist. It should be an empowering episode about me getting out of toxic relationships and really having this like fairytale love story that is my reality.”