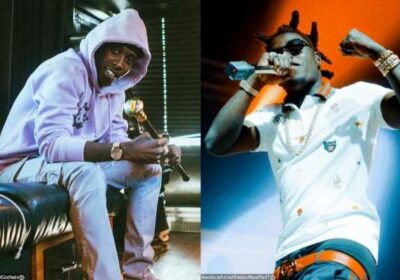 Upon hearing his son rhymes, ‘I’m getting f**ked tonight’ during an Instagram Live, the ‘Wake Up in the Sky’ spitter takes some moment to teach his kid about sex.

AceShowbiz –Kodak Black has been left in disbelief by his child’s recent action. Shortly after his son rapped his own version of Starboi3‘s “D**k” lyrics during an Instagram Live, the “Wake Up in the Sky” rapper looked surprised with what the little boy just said.

Kodak couldn’t help but laugh after his son innocently replied, “By my girlfriend.” The MC then set aside time to teach him and his daughter a lesson. “See listen, no, no, no, no, no. We do the f**kin’, you know what I’m saying? [Men] do the f***ing. She getting f***ed tonight,” he explained, while giving a visual description of sex by moving his hips back and forth. The kids then burst into laughter.

Not stopping there, the “ZEZE” hitmaker also advised his children to use condoms. He then told the viewers, “They already knew this s**t. I’m just guiding them the right way. I didn’t even teach them nothing.”

Although many of Kodak’s fans found it funny, some others expressed their concern. One user in particular argued, “Oh no that’s not cute.” Another added, “Sad. And yall think it’s funny! Black folks will never get ahead.” A third chimed in, “Its so nice to see how people think that is funny smh.”

The criticism didn’t stop there. More came forward with one fuming, “Disgusting if they even think it’s cute are children are innocent we should want to keep it that way.” Someone else raged, “Terrible not age appropriate. First let’s correct the child’s language then let’s not model or simulate sex for a young child.”