Kit Harington is jumping from one massive fantasy franchise to another, and he will be seeing a familiar face from his Game of Thrones days when he takes on his new role within the Marvel Cinematic Universe. At Disney’s D23 Expo over the weekend, Marvel officially revealed that Kit Harington had been cast in a main role in the superhero franchise’s upcoming film The Eternals. And Kit Harington joining Marvel’s Eternals movie also means big things for Game of Thrones fans, since it means that Harington will be reunited with his on-screen brother Richard Madden for another major sci-fi adventure.

After a lot of fan speculation about Kit Harington possibly joining the Marvel Cinematic Universe over the past week, Disney finally revealed that the former Game of Thrones star will be playing the role of Dane Whitman (aka Black Knight) in The Eternals. The casting ups the already impressive star power of the upcoming space epic even more —the rest of the confirmed Eternals cast includes Angelina Jolie as Thena, Salma Hayek as Ajak, Richard Madden as Ikaris, Kumail Nanjiani as Kingo, Brian Tyree Henry as Phastos, and Gemma Chan as Sersi. Fans got a first look at the cast together for the first time when they took to the stage at the D23 Expo over the weekend.

For Game of Thrones fans, this casting announcement is extra special, since it also means a Stark family reunion within the MCU. Of course, Kit Harington is best known for playing Jon Snow in Game of Thrones, who had a very close bond with his brother Robb Stark (played by Richard Madden) before his shocking death in Season 3. Well, to get technical about it, Jon Snow was actually revealed to be Robb’s cousin rather than his brother, but that is really just semantics.

Since Richard Madden is playing the Eternal Ikaris in the new Marvel movie, Harington’s casting means that in some sense, Jon and Robb finally get their reunion… except they’ll be covered in spandex instead of fur pelts. 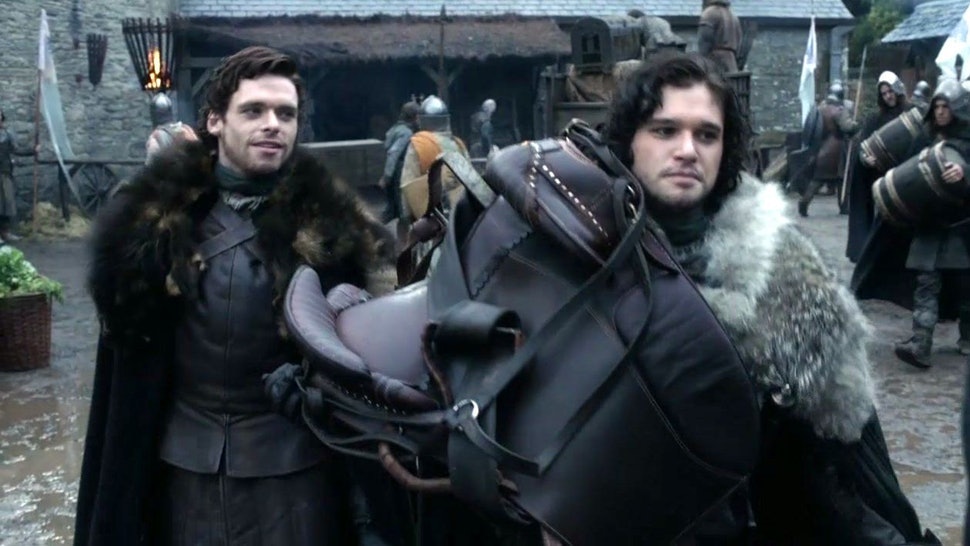 Aside from the Game of Thrones angle, Kit Harington’s new role will also be a very interesting one within the MCU. Although Dane Whitman is debuting in The Eternals, he himself is actually not a member of the eponymous superhuman race. Instead, Harington’s character is, for all intents and purposes, mostly a regular human who is skilled in combat and is an excellent strategist. That said, he does gain some magical advantages in the Marvel Comics.

Dane Whitman inherited the title of Black Knight from a long line of his ancestors, dating back to the time of King Arthur. His most powerful weapon is the Ebony Blade, which can cut through pretty much anything and grants him imperviousness to magic and even death. Probably most integral to The Eternals, though, is that Black Knight falls in love with the Eternal Sersi in the comics, and she grants him some of her superhuman powers. Sersi is confirmed to be a main character in The Eternals, played by Gemma Chan, so fans might see a love story play out between the two.