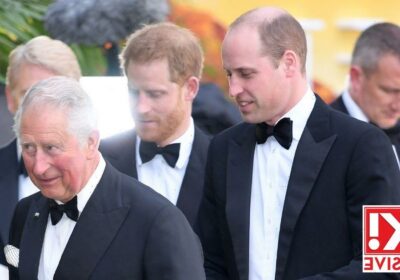 King Charles III has shown he is "determined" to heal the rift between his sons Prince William and Prince Harry since becoming the monarch, a royal expert has claimed.

Charles became King on September 8 after the sudden passing of his mother, Queen Elizabeth II, who died at the age of 96.

In his first address to the nation, less than 24 hours after becoming King, he said: "I want also to express my love for Harry and Meghan as they continue to build their lives overseas."

Royal expert Duncan Larcombe says the inclusion of Prince Harry, 38, and his wife Meghan Markle, 41, proves the new monarch's determination to get William, 40, and Harry back on good terms.

Duncan tells OK!: "King Charles has indicated that he is determined to heal the rift between his sons.

"The speech was a very carefully considered and perfectly executed olive branch from a person who was, frankly, not only burying his mother but he was also burying Prince Charles.

"The father that Harry knew almost doesn't exist anymore, he has changed.

"Charles needs to solve this dreadful and harmful row between his sons," he continued.

"There's only so much you can do, but I think publicly declaring his love for Harry and Meghan during a speech where he barely mentioned a soul was a deliberate and strategic attempt by The King to say, 'Right, enough is enough, this is how much I still love you, everything has changed,' that was a message to Harry."

The gesture in The King's speech came just days after Harry had reportedly declined an offer to spend part of his UK visit with his father, a move that had deeply saddened the monarch.

Harry and his father have not been on the best of terms since Harry stepped down from his royal duties and moved to the United States with his wife – but Charles was keen to remedy that during Harry's recent visit.

A source told the Mirror: "He hasn’t wavered, despite the attacks, which seem to be coming with increased vigour.

"The [then] Prince of Wales reiterated his invitation for Harry and Meghan, and the whole family if they wished, to come and stay with him this summer while he is at his home on the Balmoral estate.

"He thought it might be a good opportunity for everyone to take stock and relax, but the invitation was declined."