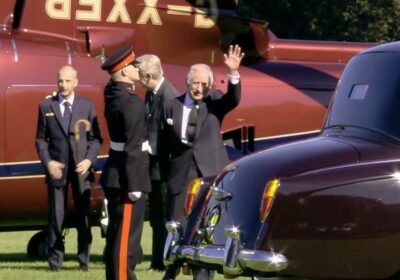 The King and Queen Consort are visiting Wales today, as the late Queen's lying in state continues at Westminster Hall.

King Charles III has begun his first visit to Wales as monarch and will start his tour by attending a service of prayer and reflection for the life of the Queen at Llandaff Cathedral in Cardiff.

Charles arrived by helicopter with the Queen Consort and travelled by state limousine in bright sunshine to the service, which is also being attended by Prime Minister Liz Truss and leading figures from Wales.

A booming gun salute fired from Cardiff Castle was heard across the Welsh capital when the King and Queen Consort first arrived.

Cheering schoolchildren and members of the public lined the royal couple’s route to the cathedral.

They will then travel to Cardiff Castle where Charles will hold a private audience with Welsh First Minister Mark Drakeford and the presiding officer, before attending a reception hosted by the Welsh Government.

After this the monarch is expected to return to Buckingham Palace, where he will be hosting faith leaders in the Bow Room.

While the King and Queen Consort are visiting Wales, the Prince and Princess of Wales will visit Army Training Centre Pirbright, in Surrey, to meet with troops from the Commonwealth who have been deployed to the UK to take part in the state funeral of Her Majesty The Queen.

It has been announced that the late Queen's funeral will be held on on Monday 19 September, with proceedings starting at 8am as the doors of Westminster Abbey open.

For all of the latest updates, sign up for OK!'s Royal newsletter .

The Queen’s coffin will leave Westminster Hall and be carried during the procession to the Abbey on a 123-year-old gun carriage towed by 98 Royal Navy sailors in a tradition dating back to the funeral of Queen Victoria.

The Procession will be led by 200 musicians made up of the Pipes & Drums of Scottish and Irish Regiments, the Brigade of Gurkhas, and the Royal Air Force.

It is is due to arrive at Westminster Abbey at 10.52am where the coffin will be lifted from the gun carriage and carried into the Abbey for the state funeral service that will start at 11am.

At around 11.55am the Last Post will sound, followed by two minutes of silence to be observed in the Abbey and throughout the UK, and then a national anthem that will end by 12 noon.

The bearer party will then lift the coffin again and take it to the State Gun Carriage positioned outside the West Gate.

The coffin will be followed by the King and the Queen Consort, the Prince and Princess of Wales, and members of the royal family who will walk in the procession to Wellington Arch where it will then be returned to the gun carriage and taken to Wellington Arch at Hyde Park.

At Wellington Arch the royal family will watch as the Queen’s coffin is transferred to the new state hearse, before it begins its journey to Windsor Castle, where the late monarch will buried with her late husband the Duke of Edinburgh.