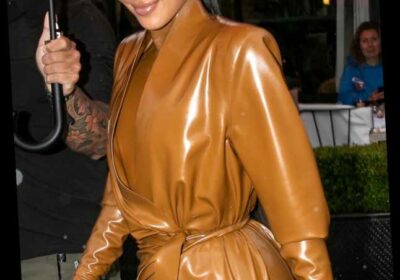 If a picture is worth a thousand words, Kim Kardashian West’s Instagram in a bikini and Yeezys speaks volumes. As divorce rumors continue to swirl, the KKW Beauty founder’s Jan. 31 post is a subtle but supportive nod to her husband. In the sultry snap, she wore a brown string bikini and Yeezy Foam Runners, her husband’s Crocs-like shoe. "Just Chillin’," Kim captioned the post.

Some fans wondered if her choice of footwear was intended to send a signal about her relationship status. “Am I the only one wondering if they’re back together bc of the yeezy’s??” one commented. Another added, "Still got the yeezys on, 👀are you guys back together?" On Twitter, a third fan wrote, "Kim sweetie, you’re getting divorced you don’t have to wear the ugly shoes anymore."

News of the couple’s rumored divorce broke on Jan. 5, when a source reportedly claimed to Page Six that Kim had hired celebrity divorce attorney Laura Wasser. That same day, Us Weekly claimed Kim and Kanye had a massive fight in early December 2020. Us Weekly also reported claims their relationship had been strained ever since Kanye divulged deeply personal information about their family during his first campaign rally while running for president in July 2020. The couple has reportedly been living separately for months, with Kim and their four children — North, 7, Saint, 5, Chicago, 3, and Psalm, 1 — in California and Kanye in Wyoming.

Kim and Kanye haven’t made any recent comments on the state of their marriage. Elite Daily previously reached out to reps for the couple for comment on the divorce rumors and did not hear back.

But Kimye fans might not have to wait much longer to learn exactly what’s going on behind the scenes. According to a Page Six report on Jan. 19, Season 20 of Keeping Up with the Kardashians (the show’s final installment) will cover the couple’s marriage troubles. A source reportedly claimed, "The Kardashians intend to go out with a bang. They’ve filmed Kim discussing her marriage problems. But everybody involved is on a nondisclosure agreement because the finale won’t screen until later in 2021."

The final season of Keeping Up With The Kardashians premieres March 18 on E!, and you can count on it being major.