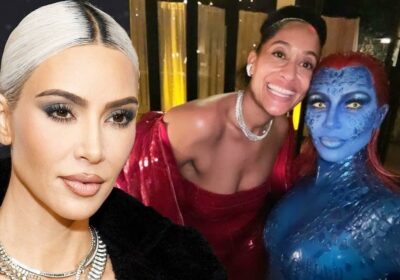 Kim took to social media to share a picture of herself in a blue latex costume and green contact lenses.

She could be seen standing next to Tracee, who was wearing an elegant red dress and matching jacket.

Kim captioned the shot: “That time I showed up to a birthday dinner in full costume when it wasn’t a costume party!

“Happy Birthday to the most beautiful soul @traceeelliseross,” the reality star added.

Kim has been known over the years to spark admiration – and sometimes controversy – about her outfit choices.

She recently came under fire after stepping out with her nine-year-old daughter North West, who was wearing a full leather face mask.

Kim found herself at the centre of controversy last month over her and estranged husband Kanye West’s daughter North West’s outfit.

Her unusual choice of headwear appeared inspired by her parents, who had been seen earlier this year wearing different kinds of face masks covering their heads completely.

Following North’s appearance in the city, social media users took to Twitter to express their thoughts on the daring fashion choice.

“Emmulating Mom and Dad on this one should have been stopped.” (Sic)

Kim and Kanye, who tied the knot in 2014, share four children: North, Saint, Chicago and Psalm.

Kim previously spoke out about expanding her brood after her third child in an episode of Keeping Up With The Kardashians.

She said: “Kanye wants to have more. He’s been harassing me. He wants like seven. He’s like stuck on seven.

“[Seven kids is] crazy. I could never, especially in like the world we live in.

“I’ve been kind of hesitant about having more kids because it literally keeps me up at night, thinking about how my kids will survive in a crazy world like this.”