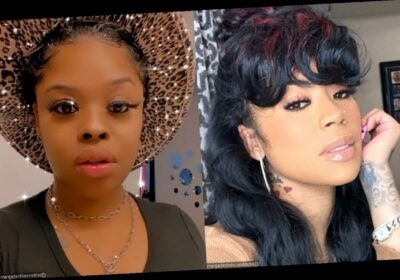 ‘This isn’t out of bitterness nor hatred ….. to be honest I’ve gotten more bread by being disassociated if anything,’ Elite writes in an Instagram post, slamming the ‘Love’ hitmaker.

AceShowbiz –Keyshia Cole‘s sister Elite Nole has had enough with people asking her about the “Love” hitmaker. Taking to Instagram Story, Elite made it public that she no longer has a working relationship with Keyshia.

Elite went on saying, “I’m not talking about (The MUA, the stylist, the hair dresser ) I’m talkin real friends/family ! Sis like ‘yes’ men , people that will ask permission to do their ‘own thing’ ….. oh and please believe if around her and not on ‘pay roll ‘ u broke fa sho fa sho.”

She then accused Keyshia of underpaying her, writing, “I stopped working for my sister cause I was underpayed and under appreciated! Same reason why everybody else quit ….. It wasn’t no respect ! This isn’t out of bitterness nor hatred ….. to be honest I’ve gotten more bread by being disassociated if anything.”

Prior to this, Elite blasted Keyshia for reuniting with O.T. Genasis who insulted their mother over her substance abuse struggles when the rapper was feuding with Keyshia over his unauthorized cover of her song “Love”. At the time, he additionally shared a picture of himself attending an ugly sweater party in a sweater with Keyshia’s image and the words “Merry Crip-mas” on it. The 32-year-old rapper also mocked Keyshia’s vagina, claiming that it smells “like fish.”

After Keyshia and O.T. worked together on “Verzuz”, Elite addressed the matter in an Instagram video. “Let me just tell y’all where it left for me,” she shared. Making it clear that she was not in for the idea, Elite continued, “When she let him hug you, that guy on the Internet who joked about selling your mother’s motherf***ing crack, that’s when I step back. That’s a no go for me.”