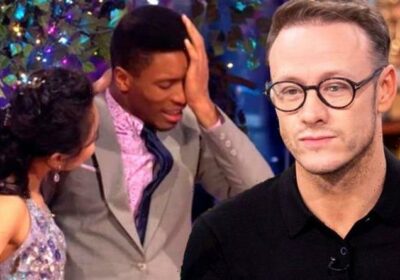 Strictly: Tess asks Rhys if he’s having ‘a little cry’

Kevin Clifton took to Twitter to defend Rhys Stephenson after he danced an emotional Waltz with partner Nancy Xu to Light Up My Life by Whitney Houston. The former Strictly Come Dancing pro claimed Rhys never “gets the credits he deserves” when he felt the star was not getting enough love from fans on Twitter.

Emotions were running high for CBBC presenter Rhys, 28, following his close call last week as he battled to keep his place in the competition.

Rhys and Nancy, 30, were placed in the bottom two last weekend alongside Tom Fletcher and Amy Dowden, with the latter eliminated.

This week, the pair came back fighting, earning a total of 35 points for their Waltz, which landed them in third place out of six remaining couples.

Despite this, one Twitter user Hayley Douglas wrote: “I found Rhys’ waltz to be a little boring tonight, sorry.”

Little did they know former Strictly star Kevin, 39, would reply to the Tweet, saying: “Very difficult to make an impact with a Waltz but I think it was my fave of the night.”

The star also sent out another tweet to his 253,000 followers praising Rhys and Nancy for their performance.

He tweeted: “Yeah I thought Rhys was brilliant. Feel he never quite gets the credit he deserves.”

Following his performance, Rhys appeared overwhelmed as he burst into unexpected tears.

Presenter Tess Daly, who has come under fire on social media for patronising the young performer, was quick to console him.

She asked: “Are you crying honey? Are you? Are you having a little cry?”

“I know you really wanted to do well. You don’t want to be in that dance-off again do you?” she added.

The judges’ comments were generally positive, with Cynthia Erivo, who was standing in for Motsi Mabuse, saying: “I love the connection the two of you have on that dance floor. You move with such grace, I just want you to breathe more.”

Shirley Ballas added: “You have astounded me from the top to the bottom, it was beautiful.

“It had grace, it had charm, I felt your emotion. I just want to give you a hug and say well done.”

While a less impressed Craig said: “I felt you were following and not leading this dance. For me it lacked drive completely, there was no swing, there was no sway, that is what made it look square and blocky.”

Later on Rhys became even more emotional when presenter Claudia Winkleman showed him a video message from his nan and grandad in the Cayman Islands congratulating him on his turn in Strictly so far.

The star appeared to be completely overcome with emotion and was clearly happy to have received such a high score at the end of it all.

Beating out Rhys and Nancy to the top spot were John Whaite and Johannes Radebe, who received a near-perfect score of 39, and favourites AJ Odudu and Kai Widdrington with their score of 36.

Meanwhile, Tilly and Nikita sit at the bottom with 30 points, closely behind Dan Walker and Nadiya Bychkova, who received 31.

Strictly Come Dancing: The Results airs tomorrow night at 7:20pm on BBC One.