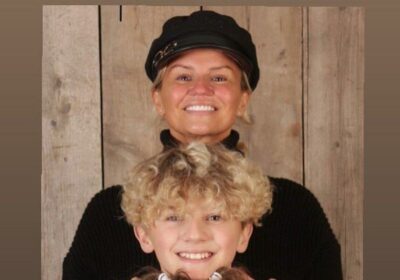 The Atomic Kitten alum reveals her teenage son Maxwell is taking a job on a building site in London, saying it’s ‘so important’ for kids to make their own money.

AceShowbiz –Kerry Katona‘s teenage son Maxwell takes a job for £50 a day, and Kerry insists it’s “so important” that her brood make their own living. The former Atomic Kitten star’s 14-year-old boy – whom she has with second husband Mark Croft – is expected to work on a building site with her fiance Ryan Mahoney‘s family.

“My Max is going down to London to spend three weeks with Ryan’s brother and dad,” the mother-of-five – who also has Heidi, 15, with Mark and Molly, 20, Lilly-Sue 19, with Brian McFadden, and Dylan-Jorge, eight, with the late George Kay – wrote in her latest new! magazine column.

“He’ll be working on a building site and getting £50 a day for it. I think it’s so important for my kids to make their own money.”

Kerry expressing the importance of her kids making their own money comes after she recently admitted she wanted to take her own life after not being able to afford her children’s school uniforms.

The “Whole Again” singer has been declared bankrupt twice, in 2008 and 2013, and she struggled with finding the money to feed her children or pay her rent.

Appearing on The Sun newspaper’s “Dear Deidre” podcast last month, she said, “There’s been times when I’ve been ­wanting to drive my car off a bridge because I think, ‘How am I going to clothe these five kids?’ I understand the anxiety over money.”

During the first lockdown in 2020, Kerry was in a tough spot and sold her vintage jukebox to help her finances. She added, “I couldn’t afford to pay my rent. I thought, ‘Oh my God, how am I going to feed the kids?’ “

The 41-year-old star admitted, while her money woes have been devastating, they also helped her realise who her true friends were. She added, “There’s a stigma that comes with debt. Just like little rats, they all just disappeared.”

Kerry has since turned her fortunes around, with her OnlyFans account giving her bank balance a boost. Last year, she and her personal trainer fiance moved into a £2 million Cheshire mansion, and she recently showed off her new Lamborghini on Instagram.

She said, “I like to think, if I can do it, anybody can do it. It’s not always that easy, but there is always an end to a tunnel.”