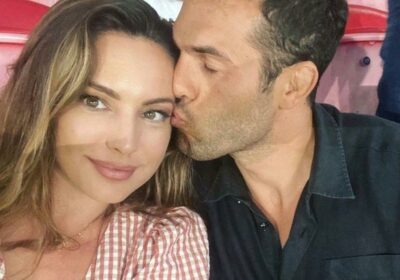 Kelly Brook is splashing out on her dream wedding to model Jeremy Parisi, with a £5000,000 ceremony in Italy, according to reports.

The loved-up couple, who have been together for seven years, are thought to have secretly gotten engaged earlier this year, and are now set to marry “within days".

Kelly, 42, Jeremy, 37, and their celebrity guest list – which is rumoured to include Kylie Minogue – are said to be looking forward to an “extravagant” wedding at a 19th century Italian villa, complete with a funfair for guests after the main ceremony.

An insider said: “Kelly has thrown the kitchen sink at her wedding and it’s turning into quite an extravagant affair.

“She has booked the Villa Nota Pisani in central Italy for the ceremony and reception. It is a beautiful location and they fell in love with it as soon as they saw it."

The insider continued to The Sun: “Kelly has invited all her friends and stars like Kylie are on the guestlist.

“The ceremony is going to be really romantic but Kelly wants to give her family and pals a real party afterwards.”

The couple are yet to publicly confirm their engagement, although former Page 3 model Kelly has been spotted wearing a diamond ring on her ring finger.

The source went on: “She has been in talks with a company to put on a funfair for everyone — and the drinks will be flowing all night

“Kelly knows Jeremy is her soulmate and this is going to be her only wedding so she’s going all out.

The couple met on Instagram in 2014 when Kelly slid into Jeremy's DMs and went public with their relationship the following year.

The model admits she "fell in love at first sight" after asking Jeremy for fitness advice during her time in Los Angeles.

Kelly previously revealed to OK! that she once proposed to Jeremy, and he said "no".

The model confessed that she bucked tradition and popped the question to her boyfriend of then-three years while on holiday.

However, the Italian TV personality quickly shut down her proposal, telling her not to do it in public.

"When we were in Antigua, and the sun was setting, and we were up at Shirley Heights, I said to Jeremy: 'Will you marry me?'", she revealed.

"And he said: 'Be quiet there are people around!'

"So I tried to propose, but he said it was too busy and told me to be quiet! I've asked him, but it wasn't private enough!'"