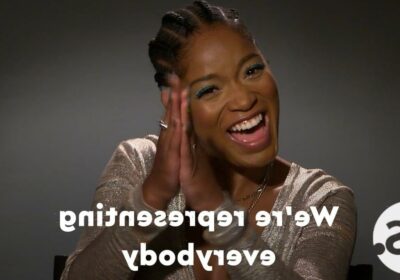 Keke Palmer is one absolutely shining star in “Lightyear,” the film blasting into theaters that explores the origins of Toy Story’s beloved space ranger Buzz Lightyear. Since she voiced one of the movie’s spacefaring adventure seekers, we had to ask Palmer: would she go to space? The answer was a very tentative yes, but only after many others do it first. She specifically called out one Jeff Bezos, noting she’d like to watch what happens to the billionaire before she puts her eggs in the space basket. Your move, Bezos.

Beyond that, Palmer told us all about her love of the Toy Story franchise, whether she prefers Woody or Buzz (despite her commitment here, the answer may surprise you), and why the movie’s inclusivity is so important. Her explanation of how the film underscores the message that “everybody is a hero” goes to show that this is another Disney/Pixar release that is ready to inspire.

See the full interview above, and catch “Lightyear” in theaters now!