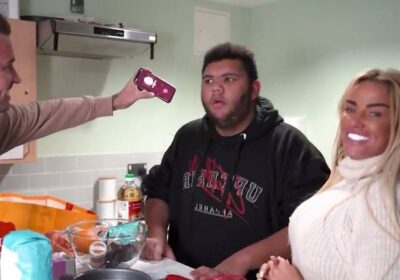 Katie Price’s son Harvey was delighted as he got a special call from Santa.

The 19-year-old’s face lit up after receiving a call from Father Christmas himself, as Katie Price and her fiance Carl Woods visited Harvey at his residential college.

Katie, who narrowly escaped prison time for drink driving earlier that day, and Carl excitedly surrounded the teen as he heard from Santa and received the news that he was on the ‘nice list’ for Christmas this year.

The sweet video comes just hours after mum-of-five Katie received a 16 week prison sentence, suspended for 12 months after pleading guilty to drink driving, driving whilst disqualified and driving without insurance following a crash near her home in Sussex in September. The reality star, 43, was also handed a driving ban after crashing her car while under the influence of alcohol and she recentlyadmitted she found it "hard" being unable to drive to see her son Harvey in college.

When sentenced at Crawley Magistrates' Court on Wednesday 15 December, the star was told she’d also have to do 100 hours of unpaid work in the community.

A suspended prison sentence means Katie will not spend time in prison as long as she meets certain conditions set out by a judge.

If those conditions are broken, however, she could fail jail time.

The day after the sentencing, Katie broke her silence and pledged to work on her mental health going forward.

The former glamour model took to her Instagram stories to share her a statement, telling her 2.6million followers: "I would like to thank my family – my children, my mum, dad, sister, brother, my partner Carl, Leigh, and my friends who have supported me throughout these past few months."

She went on to explain that she understands the dangerous situation she was in as she wrote: "It's been a really difficult time and I'm incredibly sorry for my actions – I'm sincerely grateful nobody was hurt – I realise the damage my actions could have caused not only to another family, but to my own as well."

Katie then pledged to work on her mental health as she continued: "I'm now spending time getting better – mental health is a hidden illness and can strike at any time.

"The triggers that cause my anxiety and behaviour are something I'm trying to understand, come to terms with, and learn to control moving forward.

"This will be a long process for myself and something I'll continue to work on for the rest of my life. It's also something I can work with my family so we can progress on a new chapter together."

Showing her gratitude to her fans, Katie, who recentlyput on a united front with fiancé Carl Woods , added: "Thank you for all the messages of goodwill that I've received.

"I'm going to surround myself with my loving family and friends and continue doing the work I love as it brings me enjoyment and helps my mental health. Thank you everyone."

Stay up to date with all the latest on your favourite stars by signing up to OK!'s daily celebrity newsletter.