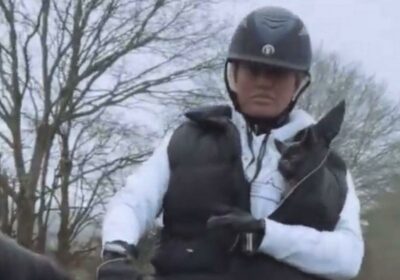 Katie Price has faced criticism for deciding to take her new Chihuahua puppy with her as she went for a horse ride with fiancé Carl Woods.

The 43 year old, who fuelled pregnancy speculation by wearing a 'Baby' necklace, was seen on horseback on Carl's Instagram story, and fans soon spotted her pooch Buddy inside her jacket as she was trotting along.

After getting out and about in the fresh air, Katie shared a picture of herself kissing the puppy and wrote: "Buddy [is] so cute he loves my cuddles," with two love heart emojis.

However, after seeing the star taking Buddy out on her horse ride, Katie was inundated with comments from concerned followers telling her she shouldn't be in charge of pets.

"How long will this one be around for?" one of her followers commented, before someone added: "Why go horse riding with Buddy tucked in your jacket?

"You should be holding both reigns. If your horse got spooked and you are thrown off, that poor dog would be crushed."

Another shared: "A pet is more than a pawn to pose with.

"Please, please take care of the dog," another social media user wrote, while one fan remarked: "You should be banned from having anymore dogs."

"You should be banned from keeping animals full stop," a sixth fired at Katie.

Fans been concerned over Katie's animals for a long time as some of the animal additions to her family have not lasted long.

The most recent incident saw the star give away a French bulldog to a pal last September.

This came after her dog Rolo – who she gave to her daughter Princess on her 13th birthday – died tragically after getting stuck in an electric bed in 2020.

Katie's Alsatian – named Sparkle – was hit by a car when it ran out onto the road after escaping home.

It comes after it was reported Katie's children Princess, 14, and Junior, 16, are "refusing" to live at home after it was announced Channel 4 will be releasing a show with Katie turning her "Mucky Mansion into a home again".

"While they were filming, Katie was upset to hear that Princess and Junior hate the house," a source told The Sun.

"Although she's also said she hates it, she really wants to turn the house around – she's re-doing all of the bedrooms to make it a proper home again."

For all your updates on Katie Price, her work commitments and romantic life, sign up to our daily OK! newsletter.