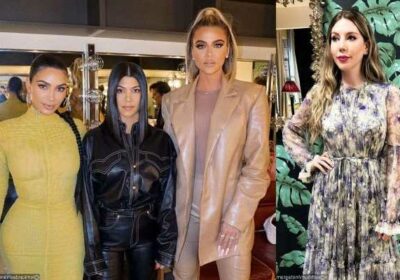 Believing that the ‘Keeping Up with the Kardashians’ siblings have gone under the knife to change their appearances, ‘The Duchess’ actress tells them not to ‘treat [her] like an idiot.’

AceShowbiz –Katherine Ryan has some words to say to the Kardashian sisters. Believing that Kim Kardashian, Kourtney Kardashian, Khloe Kardashian, Kylie Jenner and Kendall Jenner have gone under the knife to change their appearances, “The Duchess” actress urged them to stop denying plastic surgery rumors surrounding them.

The 37-year-old offered her message when speaking in the Thursday, April 29 episode of Vicky Pattison‘s “The Secret” podcast. “I know [they have] Dr Jason Diamond, he is the family dermatologist. So he’s doing a lot of the peels and the lasers, they also go to Simon Ourian,” she said of the reality star siblings. “Jason Diamond is a surgeon, he does face lifts and things as well, but I don’t think he does any surgery on them.”

“I think they’re offering these two guys as smoke screens to be like, ‘Here’s who I go to for a lovely gentle vampire facial,’ but there’s someone with the fat gun in the back and that’s the person whose name I need,” the comedian went on. “That’s not a criticism, it’s like, don’t treat me like an idiot, there’s a point where we have to be honest and share the wealth.”

Katherine then explained why she thinks it is important for the “Keeping Up with the Kardashians” stars to share the truth. “Because if people do choose to participate in this trend of changing your body, which is a really contentious issue and I’m not saying anyone should, but there’s a danger of if you don’t know who to go to, then you put yourself in harm’s way, and fly somewhere and meet someone who doesn’t have a licence and I don’t want that for people,” she elaborated.

Katherine’s suggestion came around three weeks after Khloe’s alleged unedited picture made its way online. However, the snap that showed the Good American founder standing by a pool wearing a skimpy leopard print string bikini has been taken down from sites across the internet since she went “ballistic” over it.