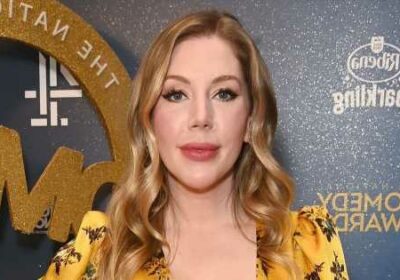 Katherine Ryan has broken her silence following reports of a dispute between her and her neighbours after a balcony was built that overlooked her swimming pool.

Katherine, 38, lives in a gorgeous London property with her husband Bobby Koostra, their baby son Fred, and Katherine’s 12 year old daughter Violet from a previous relationship.

The comedian expressed her unhappiness of the balcony having been built back in April, and has since issued an update on the ongoing ordeal.

Katherine, who studied city planning at university in Toronto, said at the time: "Due to my background in urban planning, I was able to report them.

“I'm not a snitch, but their prejudicing of my property actually devalues my property.”

She added to the MailOnline: "I have 12 year old girls in the swimming pool and then a bunch of builders like leaning over that balcony smoking."

The Duchess star has since clarified that no one is living in the property yet, and it’s the developers she’s raised the issue with.

“Oh, so that made the news like I was embroiled in this fight with my neighbours. I don't have any neighbours, they're building a house so that was my issue,” she told MailOnline.

“No one actually lives there but they did have an illegal erection and a balcony that wasn't allowed. But when someone lives there, I'll deal with it.

“Actually I don't think I'll have to deal with it, I think the planning commission will probably deal with it.”

As well as this ongoing fiasco, Katherine has been busy potty training her son Fred and successfully did so by the time he was just eight months old.

Addressing the criticism she faced as a result of this, she told us: “The reason that I share some of my parenting viewpoints, let’s call them, is because I understand that they are unconventional.

“I never want to shame any other parent or judge them for the way that they choose to train their children or raise their children but I just feel like it’s always useful to get a different perspective and to think outside the box.”

Agreeing that her methods were “unconventional”, Katherine continued: “The way that I parent is unconventional. I respond to my children’s needs immediately, I tour with them, I sleep with Fred – not Violet, obviously, she’s too grown up and I’m a boomer and a Karen, apparently – but I think it’s good to offer people an alternative because I’m all about choice and variety.”