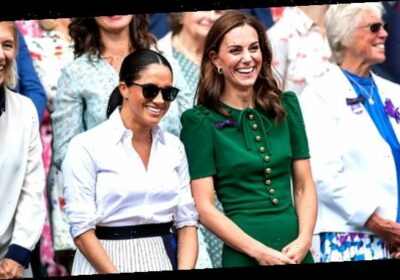 Kate Middleton wore a pair of pink Missoma drop earrings roughly one day after her sister-in-law spoke to Oprah Winfrey. See the video of Kate sporting the jewelry on International Women’s Day!

Kate Middleton chatted with 21-year-old rower Jasmine Harrison to celebrate her accomplishment after completing a record-breaking 3,000-mile journey across the Atlantic. The two women chatted on International Women’s Day, and the Duchess of Cambridge, 39, seemingly sported a pair of earrings that may have been a nod to her sister-in-law, Meghan Markle. The mother-of-three wore a pair of stunning pink drop earrings from the brand Missoma, a noted favorite of her sister-in-law, also 39. Check out the video below!

Some fans in the comment section of the Twitter post may have noted the jewelry, with some leaving messages of support for both women, following Meghan’s explosive interview with Oprah Winfrey on March 7. “As Meg said, Kate is a lovely woman- loving me doesn’t mean hating her, hating me doesn’t mean loving her,” one Twitter user wrote. Another commented and seemingly agreed, writing, “If [International Women’s Day] means anything, surely it means that!”

The video, released on International Women’s Day, comes roughly one day after the March 7 CBS interview with Meghan and her husband Prince Harry. During Meghan’s conversation with Oprah, the Duchess of Sussex alleged that the two sisters-in-law had a disagreement that left Meghan in tears just days before her wedding in May 2018. “No [I did not make Kate cry]… The reverse happened,” Meghan revealed, referencing tabloid stories that surfaced roughly six months after her nuptials claiming that she made Kate cry.

“I don’t say that to be disparaging to anyone, because it was a really hard week of the wedding and she was upset about something, but she owned it and she apologized and she brought me flowers and a note apologizing, which is what I would do if I knew that I hurt someone… just take accountability for it,” Meghan said. The Duchess of Sussex reiterated the sentiment that, “If you love me, you don’t have to hate her. And if you love her, you don’t have to hate me.”

Following the interview, Kate was spotted driving back to Kensington Palace sporting a floral face mask and looking calm. Buckingham Palace has yet to comment on any of the claims that Meghan and Prince Harry made during the couple’s interview with Oprah. But Kate’s recent fashion choice will surely leave a few fans talking!