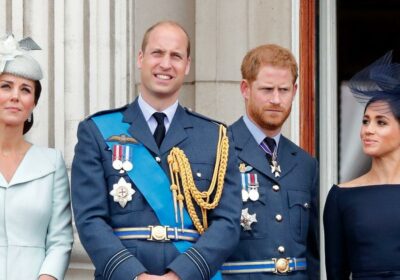 Kate Middleton is reportedly set to act as a peacemaker between Prince Harry and Prince William following their rift.

The Duchess of Cambridge, 39, is understood to be helping brothers Harry, 36, and 38 year old William put on a “unified” front for the Queen following Prince Philip’s death.

Duchess of Sussex Harry returned to the UK from the US earlier this week, while his pregnant wife Meghan Markle remains in the US following physician’s advice.

Harry, who shared a touching tribute to the late Duke of Edinburgh, is currently isolating at his former home with Meghan, 39, at Frogmore Cottage in Windsor Castle.

The Duke of Sussex is believed to have spoken to his brother William over the phone since he landed at Heathrow ahead of their first face-to-face meeting after Harry and Meghan's explosive interview with Oprah Winfrey.

And Kate is reportedly willing to act as “peacemaker” between the siblings, who are understood to be setting their rift aside to honour the memory of Prince Philip.

A source has told The Telegraph: “They know it is not about them on Saturday – it is about honouring their grandfather's memory and supporting their grandmother.

“I would be extremely surprised if that wasn't front and centre of both their minds. They will be keen to spend time together as a family, in the same time zone for once.”

Meanwhile, another insider said: “The entire focus is on the Queen. No exceptions. A family unified.”

Mum-of-three Kate, who’s children Prince George and Princess Charlotte won’t attend Prince Philip's funeral, was said to be “hopeful of a reconciliation” with Harry and Meghan before the Oprah Winfrey interview.

And, Harry perviously described Kate as the “big sister I never had” when Kate and William’s engagement was announced in 2010.

A separate source also told the publication: “Being so close to her own siblings, Pippa and James, and having witnessed first-hand the special bond between William and Harry, she has found the whole situation difficult and upsetting.”

It’s also understood that Kate is hoping to establish a rapprochement between the brothers and said to feel it’s “incredibly sad” that they aren’t on better terms.

The insider added: “She is certainly someone who shies away from conflict, and will be hoping to sooth the tensions.”

Meanwhile, it’s been reported that Harry’s wife Meghan “is ready to forgive” the Royal Family.

A friend of the 39 year old Duchess of Sussex told MailOnline: “Meghan said it's during these times when family should come together, put their differences aside and unite as one.”