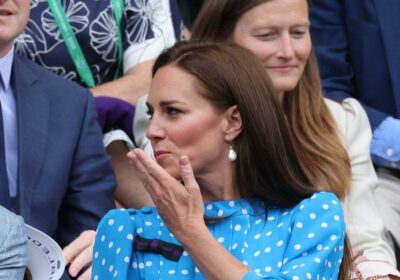 Kate Middleton was at Wimbledon on Tuesday as she attended the annual tennis tournament alongside her husband Prince William.

Making the most of her time at the championship event, the Duchess of Cambridge could be seen intently watching the players on the court as they fought their way to victory and hoped to advance to the next stages of the competition.

Joining the royal couple for the match were Kate’s parents Carole and Michael Middleton who were spotted taking their seats in the Royal Box on Centre Court, shortly after their daughter's arrival.

However the Middletons were unable to sit beside their daughter, and were instead located in seats located elsewhere in the Royal Box, but it didn’t stop Kate from showing her affection all the same.

In a sweet gesture, as soon as she had caught sight of her parents, the future Queen consort blew a kiss to her parents while smiling brightly at the pair.

The adorable moment was even caught on camera, with the affectionate scenes broadcast around the world, as she blew the kiss and waved at her mum and dad, before saying hello and engaging in a small but discreet amount of conversation.

Kate, 40, is extremely close to her parents and has shared their love of tennis from an early age.

A regular attendee at Wimbledon, she and husband William arrived at the All England Club today in time to watch British hopeful Cameron Norrie get stuck into his quarter final match against Belgian player David Goffin.

Wearing a blue polka dot dress designed by Alessandra Rich for the occasion, many eagle eyed fans may recognise the outfit as she previously wore it last month while attending a street party as part of the Queen’s Platinum Jubilee celebrations.

Waving to fans as she entered the Centre Court, Kate also delighted a number of attendees in the Royal Box, including David Walliams and his mum Kathleen, who were seated just behind the royals for the match.

Despite being a lifelong tennis fan, today’s visit was the first time this year that Kate has attended Wimbledon, where she serves a patron of the club.

Her brother however, James Middleton was spotted enjoying the tournament on Monday, alongside his wife.