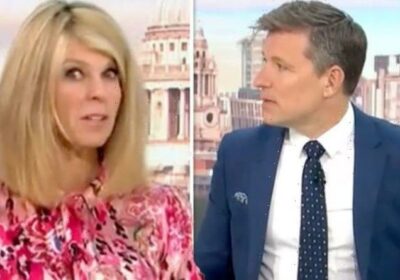 GMB: Kate Garraway reveals son was ‘thrown’ from a horse

Kate Garraway, 54, has recalled the time her 11-year-old son Billy was suddenly “thrown” from the horse he was riding. The star addressed the shocking incident while speaking to her co-host Ben Shephard on Good Morning Britain today following their interview with Team GB’s most decorated female Olympian, equestrian Charlotte Dujardin.

Kate explained to viewers that Billy, who she shares with husband Derek Draper, was thrown off the horse because the animal had “really quite bad wind”.

The journalist revealed this morning: “Billy got thrown from a horse because the horse had really quite bad wind.”

Ben seemed stunned by Kate’s story, as he gasped: “What!”

“Really bad, I’ve actually got it on film, I’ll find it if you like,” Kate replied.

Still struggling to comprehend the accident, Ben exclaimed: “Billy got thrown off the horse because the horse had bad wind?”

Kate responded: “He had a bit of windy pops. You can actually hear it on the video.

“He’s fine, everyone’s fine. The horse stopped and turned around – Smokey, the horse was – and looked at him as if to say ‘I’m so sorry’.

Kate went on to tell viewers that she would try to find the footage to show them what had happened in a future episode of GMB.

Elsewhere in the show, Kate gave viewers an update on her other half’s recovery from coronavirus.

The presenter was speaking about long Covid symptoms with Dr Amir Khan when she got onto the subject of Derek’s health.

The mum-of-two said Derek had “more issues” that he will have to battle in his recovery.

“That’s only the ones we know as well,” Kate interjected. “That’s the thing, more and more are emerging as different parts of the body are damaged.

“I know Derek is an extreme example of, all the time there are more issues.

“Initially, it was a bit of exhaustion and now it seems to be more of them presenting.”

“That’s absolutely right,” the ITV doctor told Kate. “The symptoms can be mild in some and very, very severe in others.”

Derek, 53, was rushed to hospital in March 2020 with coronavirus.

He remained in intensive care for over a year due to suffering from multiple organ failure caused by the deadly virus.

Although Kate’s spouse is now out of hospital and back at home, he has not fully recovered from his ordeal.