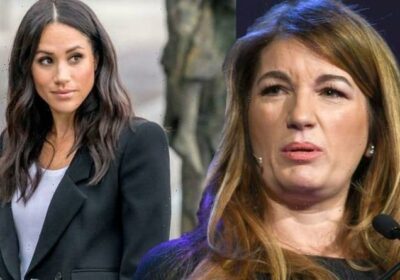 Karren Brady has shared her thoughts on Meghan Markle’s 40×40 project. It asks 40 individuals to dedicate 40 minutes of their day to helping a woman returning to the work after the pandemic.

Some are calling it a publicity stunt, but still, what a brilliant line-up

The 52-year-old has today waded in on the backlash the Duchess Of Sussex has recieved.

The Apprentice star claimed “we all need a mentor” as she backed the royal’s idea in her latest column.

Karren hit back at those that suggested Meghan’s move was “woke” and “publicity seeking”.

She urged critics to “acknowledge that this is a positive initiative”.

It comes after Meghan marked the miletsone birthday on Wednesday by making the announcement.

She shared her message in a comedic video with actress Melissa McCarthy.

Among those who have promised 40 minutes of their time are Adele, Sophie Gregoire Trudeau, the wife of Canadian Prime Minister Justin Trudeau, and fashion designer Stella McCartney.

Karren wrote: “Some people have been throwing shade on the fact that the Duchess of Sussex chose to celebrate her 40th birthday by announcing a new initiative.

“… The Duchess – who was looking wonderful and seen for the first time since the birth of Lilibet two months ago – said she wants people around the world to commit to giving 40 minutes of their time to mentor women going back to work.

“This is a great cause, because over two million women in the US and tens of millions around the world lost their jobs during the pandemic.”

It was then that Karren made her feelings even more clear, coming out in defence of Meghan’s move.

“Some are calling it a publicity stunt, but still, what a brilliant line-up of women she has queuing to help other women,” she stated.

The mother-of-two added in The Sun on Sunday: “Whatever you think of Meghan, this is such a positive way to mark turning 40 – by inviting women to help other women back into the workplace.

“We all need a mentor and a helping hand, and even those who say it is ‘woke’ and ‘publicity seeking’ surely have to acknowledge that this is a positive initiative.”

Among those mocking Meghan for the video were Australian TV hosts Karl Stefanovic and Sophie Walsh.

“I love that she’s lecturing people about getting back to the workplace and she quit her job as a royal after less than two years,” the latter said.

Her co-host even asked: “Why doesn’t she talk normally?”

Royal biographer Angela Levin was also scathing about the video. “Anyone else think that Meghan and her friend Melissa McCartney [sic] were mocking the queen in the birthday video?” she tweeted.

“Both holding old-fashioned cup and saucer like Meg used in her blog after her first meeting with Queen. Melissa sipping from the cup wearing fancy hat and gloves?”

Meanhile, others have defended her. This Morning’s Matthew Wright stated: “It is kind of naff, the comedy is a bit cringey but the message she’s getting out there… is a really important one.”