Kailyn Lowry to Chris Lopez: FINE, I’ll Give Our Baby Your Last Name! 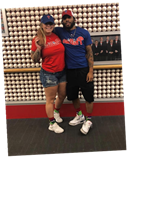 Whenever there’s a situation in which a child’s parents are constantly hostile toward one another, the hope among onlookers is that the kid won’t be dragged into the middle of any petty conflicts.

Such situations can turn ugly in a hurry, and the trauma of witnessing intense fights between one’s parents can last a lifetime.

Kailyn Lowry, of course, has three children by four different fathers, and there was a time when she prided herself on her ability to keep the peace within her household.

Sadly, it seems those days are now behind her.

Kail’s relationship with Chris Lopez has never been great, but the two of them used to be able to keep their interactions somewhat civil.

That all changed around the time that Lowry became pregnant with her fourth child, her second by Lopez.

The same month that Kail learned of her pregnancy, she filed for a restraining order against Chris.

It was later revealed that there was a separate altercation between the exes in which Lowry was arrested after allegedly assaulting Lopez.

Needless to say, it hasn’t been smooth-sailing for Kail and Chris — which is why fans were shocked when Lowry made an important symbolic gesture in concession to Lowry.

The reveal came when a fan asked a seemingly straightforward question in the comments of a pic of Kail’s youngest:

“What is his full name?!” the follower inquired.

The first and middle name came as no surprise, but this was the first mention that Kail made of giving the boy his father’s surname.

Thankfully, she played it safe by taking the hyphenated route.

That way, if little Creed grows up and finds that his dad has continued to be a disappointment, it shouldn’t be too much trouble for him to excise the “Lopez” from his name and try to forget that the man exists.

The “now” in Kail’s response suggests that this was a recent change,

Normally, we’d take that as an indication that Kail and Chris have finally managed to bury the hatchet — but the fact is, he’s been throwing major shade on Instagram recently.

When a fan recently asked about Chris’ plans for the coming year, he basically indicated that he intends to hide from Kailyn and thus, eliminate drama from his life.

It was not the first time that Lopez indicated that he’s been enduring some tough times lately.

And he’s conspicuously failed to correct fans who assumed that his low moods were because of Kailyn.

“Today I was reminded of where I’ve been hurt, and that reminder made me realize how much I’ve been caging myself and limiting my future,” he recently wrote.

“What I’ve been through may be in my eyes unfair, but forgiveness is releasing people of the debt of the offense and moving in faith.”

So maybe he and Kail briefly patched things up and now they’re back on the outs?

Or maybe Kail feels guilty about something and she made the name change in order to throw Chris a bone?

We may never know for sure.

The one thing that’s certain is that it looks as though Creed is caught in the center of his parents’ tumultuous relationship.