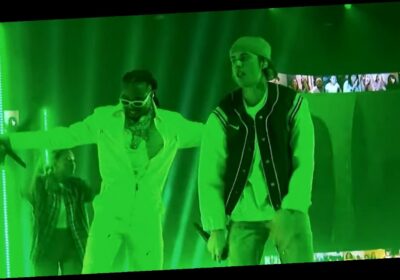 Justin Bieber and Quavo stand in a pool of slime after their performance on the 2021 Kids’ Choice Awards, airing Saturday night (March 13).

The duo performed their collab “Intentions” on the show before getting into the slime, along with their backup dancers.

The performance was introduced by Justin‘s wife Hailey. It was filmed earlier in the week. See the pics of Hailey in her outfit here!

Later on in the show, Justin took the stage again to perform a medley of his latest singles, “Hold On” and “Anyone.” Check out photos from that performance right here.

Justin was also in a winner at the KCAs. He took home two awards – Favorite Male Artist and Favorite Collaboration for his song “Stuck With U” with Ariana Grande.