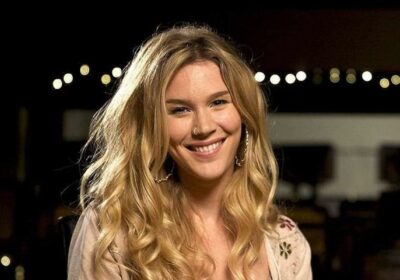 The ‘You Had Me’ singer wanted her son to have a name with ‘gravitas’ while it still sounds ‘cool’ as she talks about the moniker given to the newborn baby.

AceShowbiz –Joss Stone was keen for her son’s name to have “gravitas.” After welcoming baby Shackleton Stoker into the world with her partner Cody DaLuz in October, the 35-year-old singer has now explained she gave him a moniker in honour of “brave and noble” explorer Ernest Shackleton.

“Ernest Shackleton was a brave and noble British Antarctic explorer. The story that struck me most was of the fact he risked his life to save his crew; It’s a great story. I wanted to give Shack a name that had gravitas, something he could be inspired by and also something that could be shortened and still sound cool. I hope he likes it!” she told Us Weekly magazine.

The couple are also parents to 21-month-old Violet and Joss recalled thinking how much her son looked like his older sister when he was born. She said, “Shack is doing great, he is a lovely little guy, growing strong and healthy. I vaguely remember seeing Cody’s smiling face coming towards me and holding Shack [after his arrival] and thinking, ‘Oh my goodness, he looks just like Violet did.’ “

The “Right to be Wrong” singer is thrilled Violet has taken well to having a new baby in the house. She said, “She is totally in love with him, always checking on him, giving him kisses and hugs and constantly trying to sneak into his crib just so she can carefully sit next to him. It is the sweetest thing to watch. We are so lucky to have her, Violet is truly an angel. I love her so much. Shack is a lucky guy to have such a loving sister.”

Meanwhile, Joss admitted she and Cody, 31, have no immediate plans to get married. She said, “We will one day when we can get both our families together in one place. That will be a fun party for sure!”