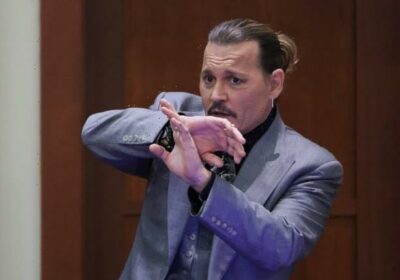 There have been plenty of shocking moments in the Johnny Depp-Amber Heard defamation trial.

For the most part, of course, they’ve happened on the witness stand, with both sides hurling stunning allegations of physical and emotional abuse.

But in a surprising change of pace, this week’s most surprising moment came from a courtroom observer who was seated in the gallery.

If you’ve been following the trial, then you probably know that a wristband to get inside the courthouse is Fairfax, Virginia’s hottest ticket these days, and the gallery is often populated with giddy Depp supporters.

But while fans of the actor have been trying to outdo one another from the start of the trial, one woman easily set herself apart from the pack on Monday, employing a tactic that quickly caught Depp’s attention.

The first account of the story came to us courtesy of Law & Crime reporter Angennette Levy who revealed that the incident unfolded just as cameras stopped rolling in preparation for the day’s afternoon recess.

“All of a sudden, this woman… she stands up at the back of the courtroom with her baby, and she says ‘Johnny I love you, our souls are connected,'”  Levy recalled.

Not surprisingly, it wasn’t long before the woman was removed from the premises.

“She held up the baby and said: ‘This baby is yours. The deputy was like ‘You’re outta here,'” Levy said.

“It was pretty wild. It was a moment,” she added.

Many inside the courtroom concluded that the woman was suffering from some sort of delusion.

But it turns out, the incident was just her idea of a funny prank.

Levy said that she caught up with the woman who made the baby claim, and the prankster confirmed that she discussed the idea with her husband, and “they thought it was a joke, and thought it would be funny.”

Well, to her credit, it probably did lighten the mood in the courtroom.

“Just FYI everybody, Johnny Depp does not have a third baby out there that was at the courthouse today,” Levy said in conclusion.

It was back to business after that distraction, with two forensic accountants taking the stand today to discuss the impact that the back-and-forth allegations have had on Depp and Heard’s careers.

The trial is expected to wrap up on Friday, and the jury may start to deliberate as early as the Tuesday after Memorial Day.

Depp is suing Heard for $50 million, alleging that she did irreparable damage to his career with a 2018 Washington Post essay in which she identified herself as a survivor of domestic violence.

Heard did not mention Depp by name in the article, but his attorneys have argued that it’s obvious to whom she was referring to when she wrote about her abuser.

Depp claims that a canceled sixth Pirates of the Caribbean feature and other lost career opportunities have led to eight-figure financial losses.

Heard has filed a countersuit for $100 million.

We’ll have further updates on this developing story as new information becomes available.