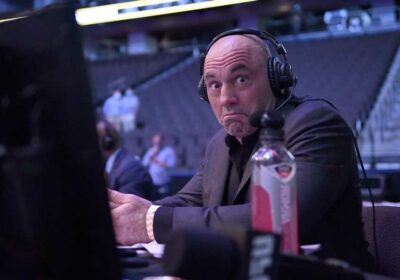 Joe Rogan dialed up his hot take machine to 11 and suggested that President Joe Biden faked getting his Covid-19 booster shot during a live televised event.

During a recent episode of The Joe Rogan Experience, Rogan asked his guest, former CIA agent Mike Baker, if he thought Biden actually received “a real booster,” adding, “I don’t think they would take the chance.” Baker — who spent nearly 20 years at an agency with one hell of a track record of spreading lies and misinformation — was happy to oblige Rogan’s theorizing, wondering if an obvious PR-101 stunt was some actually some kind of “performance art,” and suggesting, “The next step of performance art would be, like, not giving him the booster, but just giving him a shot.”

The Anti-Vaxx Movement Is Taking Over the Republican Party

'Silence of the Lambs': The Complete Buffalo Bill Story

Rogan continued to pontificate, “I think if they were going to give him a booster shot, the last thing they would do is give it to him live on television. What if he dies? What if he blacks out? What if he, like, gets it and faints? Like, because people have had very bad reactions, like, in the moment for whatever reason.”

As the CDC has noted, fainting after any kind of inoculation is possible, but it probably has nothing to do with what’s in a given vaccination, but is “usually triggered by pain or anxiety.” As for other adverse reactions to Covid-19 vaccines, they remain exceedingly rare.

Rogan’s conspiracy theory comes days after he shared a fan-made video on his Instagram page that railed against the potential dangers of vaccine mandates and creeping authoritarianism. The video included some particularly pointed images of Nazis and Jewish ghettos during World War II (the clip uses audio from an episode of Rogan’s podcast, in which the host does vent about vaccine mandates, but makes no explicit connection himself to vaccine mandates and the Holocaust).

Rogan previously came under fire for comments casting doubt on the vaccine, but while he said he’s “not an anti-vaxx person,” he has repeatedly voiced his opposition to vaccine mandates and proof-of-vaccine requirements. Rogan also has not publicly said whether or not he’s vaccinated, although as of publication he’s scheduled to perform a show in New York City on October 2nd, where proof-of-vaccination requirements are in place (he’s said he will refund tickets for those that don’t want to attend because of the rules). Earlier this month, Rogan tested positive for Covid-19 and said he used an array of drugs to try to fight it, including ivermectin.