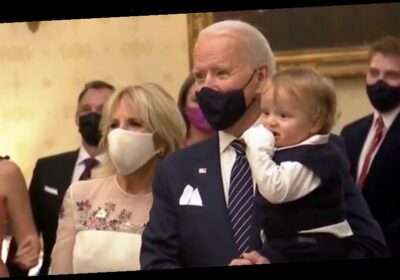 Joe Biden watched the Celebrating America event from inside the White House with his immediate family, including grandson, Beau!

The 78-year-old President of the United States capped off his Inauguration Day on Wednesday (January 20) with the celebratory event which featured performances from Katy Perry, Justin Timberlake, Bruce Springstreen, Jon Bon Jovi, Demi Lovato and many more.

While watching and holding youngest grandbaby Beau, who was named after his deceased uncle by dad Hunter Biden, Joe was surrounded by more of his family.

Dr. Jill Biden was seen by his side in a pretty white ensemble from Gabriela Hearst and matching mask, while granddaughters Maisy, Natalie, Naomi and Finnegan stood in back, next to Robert “Hunter” Biden II.

Earlier in the day, it was also revealed that after moving into the Oval Office, President Biden put up a handful of family photos, including a throwback one of his son, Beau, when he was a young child.