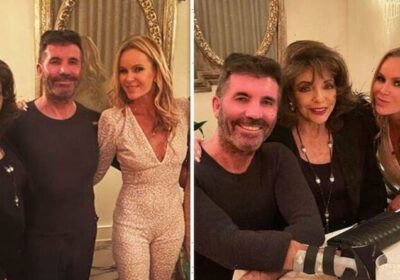 Dame Joan Collins, 88, was out on the town for a star-studded party with Amanda Holden, 51, and Simon Cowell, 62. The Brits dined at a popular West Hollywood Italian restaurant, Cecconi’s, to celebrate talent manager Jonathan Shalit’s 60th birthday.

The stars documented their evening with a series of snaps posted to Instagram.

Dame Joan shared a photo of the trio on Sunday to her 273,000 followers.

The Dynasty star sat in between the Britain’s Got Talent judges looking glamorous in a black midi dress with her hair perfectly styled and her trademark red lipstick.

Amanda dazzled in a glitzy pale pink jumpsuit while Simon wore a black jumper and a wrist brace following his second bike accident in February.

The fancy restaurant had a selection of Italian food on the menu including tuna tartare to start followed by beef porterhouse with truffle potatoes and chocolate coppa to finish.

During Jonathan’s long-running career, his clients have included Joan, Simon and the winners of Britain’s Got Talent.

The talent show’s 15th series returned to screens this weekend with Simon and Amanda joining David Walliams and Alesha Dixon to search for the country’s next big star.

Simon recently revealed that Amanda went to extreme lengths to ensure she was signed up as a judge for the latest series.

In a Q&A with Express.co.uk and other press, Amanda and Simon appeared from his home in LA.

The actress waved her contract and joked: “I’ve got my contracts here, I’m getting them signed – that’s why I’m here!

He then confirmed: “I’m not kidding, she turned up with contracts!”

The judging panel has not changed since 2012 and Simon puts their success down to how well they “get on”.

He continued: “We’ve all got different opinions, everyone in their way, has got their own kind of expertise.

“David is sometimes a comedian. Alesha knows an awful lot about singing and dance, I know quite a bit about music, and Amanda…juggles.

“You know you’ve got a good group around you when you can argue without feeling bad about arguing.

“So when we disagree, which we do a lot, it’s not uncomfortable. That’s when you know it’s a fun place to work.”

Britain’s Got Talent returns Saturday at 8pm on ITV.