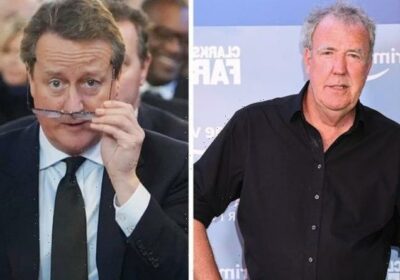 Jeremy Clarkson has fronted several hit shows over the years, including The Grand Tour, Who Wants To Be A Millionaire?, and Top Gear.

And even though he’s received rave reviews for his new series on Amazon Prime Video, Clarkson’s Farm, which recently scooped up a prize at the British Farming Awards, the 61-year-old has become doubtful he’ll ever walk away with a Bafta.

I’ve done some b****y good shows over the years

After being quizzed on whether he believed he would ever receive an OBE in a recent interview with The Guardian, Jeremy responded, saying: “You’re very sweet. But I’m more annoyed I’ve never won a Bafta.

“I’ve done some b****y good shows over the years: a good one on Brunel and some military documentaries.”

He went on to insist: “You’d think the Bafta committee might think, ‘We should at least nominate him. Drag him to London to disappoint him.’

“But as soon as the newspapers say, ‘Jeremy Clarkson, friend of David Cameron’, that’s it: ‘He’s not having a Bafta.'”

It’s no secret that Jeremy and David share a good friendship, with the latter having famously dressed up as Top Gear’s The Stig in a video message to celebrate Jeremy’s 50th birthday in 2011.

David also supported the father of three when he was suspended from Top Gear four years later, as he branded Jeremy a “huge talent”.

The suspension came after Jeremy punched a BBC producer, over reportedly feeling angered by the lack of hot food being served at the hotel he was staying in with his fellow co-stars Richard Hammond and James May.

Though he has yet to get his hands on a Bafta, in October, Jeremy accepted the Flying the Flag for British Agriculture prize before thanking his Clarkson’s Farm co-star Kaleb Coober, who he said he “couldn’t have done it without”.

Earlier this month, Jeremy and Kaleb commenced filming for the second series of their Amazon Prime show, just months after the streaming giant announced its renewal in July.

Kaleb shared a behind the scenes picture from the Diddly Squat Farm on Instagram, showing him standing in front of a tractor while the beautiful green landscape seemingly provided the perfect background.

A cameraman stood firmly behind the tractor as filming began.

“Filming is well underway,” Kaleb began his caption. “Enjoying every minute of it as well!”

And judging by the reaction in the comments section, fans were clearly ecstatic to catch a little sneak peek ahead of the season two premiere.

Another chimed in, quipping: “Keep up the great work Matey , and keep that Clarkson under control…Lol. Really looking forward to the next series….”

Jeremy had previously branded Kaleb “the star of Clarkson’s Farm” while accepting the award for raising awareness of British farming at the British Farming Awards in October.

The Doncaster native gave a heartwarming speech as he continued to stress that he wouldn’t have been able to do it without his pal.

“You are the star of the show (apart from Gerald) but what was great and I’m sure everyone in the room would say the same thing.

Season two of Clarkson’s Farm is slated for a release sometime in early 2022.