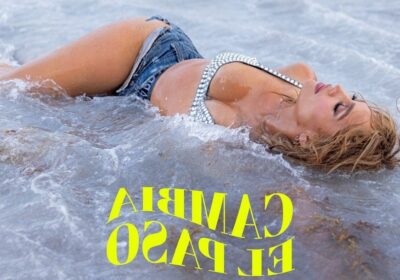 Jennifer Lopez just dropped the song of the summer!

The mega-entertainer and Rauw Alejandro teamed up to release their empowering and energetic new song, “Cambia El Paso,” on Monday. The accompanying music video, directed by Jessy Terrero, is set to be released on July 9.

The already-steamy visual shows J.Lo rocking short shorts, an open button-up and a bejeweled bra as she soaks up the surf and sun on a beach.

Lopez has been teasing her new song over the last week, sharing snippets of the track and lyrics.

“Ahora le toca ella … tomarse la botella … y salirse a divertir … and it goes like this ✨ #CambiaElPaso,” she captioned one teaser, which translates to, “Now it’s her turn, she takes the bottle and goes out to have fun.”

In another, she wrote, “Ella vive su vida … como un tango … pero ahora quiere fuego … entre sus labios,” which in English reads, “She lives her life like a tango, but now she wants fire between her lips.”

Lopez, who recently called off her engagement to Alex Rodriguez and is now romantically involved with Ben Affleck, said the track was “definitely for me, about change.”

“The song is about change and not being afraid to take the step,” she told Crisco Kidd when she called into SiriusXM’s Pitbull’s Globalization to promote her new single, “Cambia El Paso,” which translates in English to change the step. “Like, just take the step, advance, do what you need to do. If something’s not feeling right, whatever it is in your life, like, just make that move and dance.”

Alejandro previously teamed up with Selena Gomez for the sizzling track “Baila Conmigo.”

“Cambia El Paso” is Lopez’s first song since she released the sultry single “In the Morning” in November 2020. The cover art featured Lopez posing completely nude, while the ethereal music video showed her transforming into mythical creatures.

Over the last year, Lopez has wrapped her upcoming movie with Maluma, Marry Me, as well as completed filming Shotgun Wedding with Josh Duhamel. As for J.Lo’s own love life, she and Affleck’s relationship has been making headlines since they rekindled their romance in late April.

After her split from Rodriguez that same month, Bennifer 2.0 has been what appears to be inseparable. A source told ET last month that Affleck and Lopez’s relationship was progressing faster than even they expected and “picked up where they left off after all these years.”

“Although they planned to take things slow, their connection has made it hard,” the source said. “Jennifer and Ben are very into one another and in a short time are very serious.”