Every woman wants a hubby like Harry! JAN MOIR on the I’m A Celebrity lovebird who won the nation’s hearts

Never mind who won or lost I’m A Celebrity, Get Me Out Of Here (ITV1), the crowning glory of this year’s series has been, hankies out… the meltingly tender, romance-soaked, long distance love story between Harry Redknapp and his wife Sandra.

Their enforced separation by his three-week sojourn in the reality show jungle camp — the longest estrangement in their 54-year marriage, found the football manager talking candidly about how much he loved his wife.

‘Back home I call her about ten times a day. She is my life,’ he told his camp-mates. ‘I only want to be with her. I can never wait to see her.’ 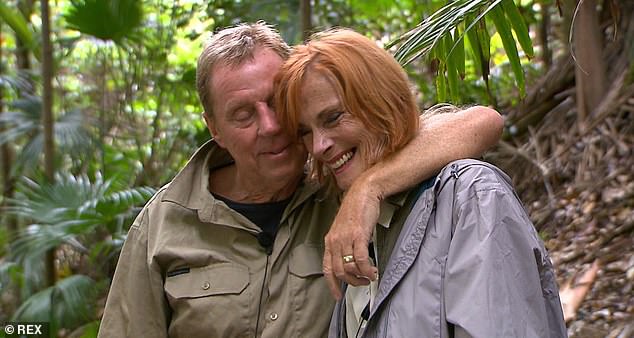 Reunion: Harry Redknapp, 71, and his wife Sandra had an emotional reunion during Friday night’s episode of the ITV series

Anything else? Yes. ‘I won the Lottery with Sandra,’ he would say, before cheerfully going off to clean the camp dunny. Ever the gentleman, Harry had volunteered for this onerous task because he has ‘no sense of smell.’

Yet elsewhere, the jungle air was drenched in Eau de Passion a la Redknapp, which he sprayed about at liberty, at every opportunity.

Sitting around the campfire with fellow contestants, he’d tell anyone who would listen that throughout his life, Sandra had always been ‘the only friend I have ever needed.’ 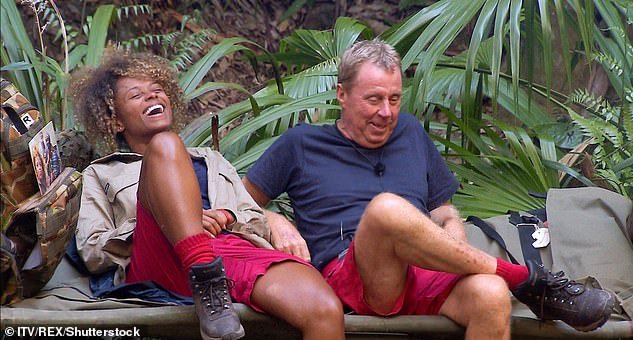 Harry Redknapp is pictured in camp with Fleur East. The former football manager was a hit on the show

The Harry who revealed himself in this show was clearly the kind of faithful, adoring partner who was in it for the long haul, and I for one absolutely adored him for it.

After all, how often do we hear men so sweetly and unselfconsciously talking about women in such a beautiful way — on reality shows or elsewhere? Hardly ever, I am afraid.

And it was particularly moving when these words were spoken from the heart by a 71-year-old with true love beaming from every tragicomic fold on his dented, bloodhound face. 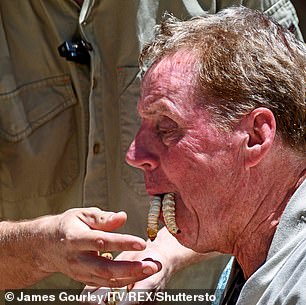 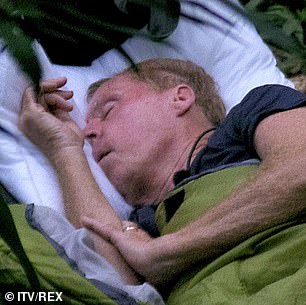 Redknapp in a Bushtucker trial, left, and right, Redknapp was said to be spending a lot of his time sleeping after becoming too weak to participate in the daily camp chores 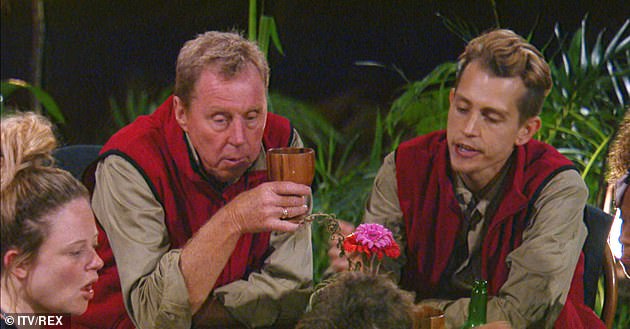 Sharing is caring! The Vamps star, 24,James McVey has been offering the football manager some of his veggies after fearing his limited food intake could take its toll on his heath

If this wasn’t enough to have viewers reaching for the Kleenex, emotions were cranked up to the max over the weekend, when the I’m A Celeb’s producers astonished the remaining four camp-mates with a surprise visit from their loved ones.

Oh my God. When Harry Met Sandra in the Australian Bush, it turned out to be one of the television highlights of the year.

In fact, it could have been a mini-series all of its own.

Millions of us wept buckets when the loved-up oldies fell into each other’s arms down by Snake Rock.

Including Harry himself, who broke down in tears of happiness. ‘I can’t help this, it is not like me, I don’t normally cry, I’m pretty old school. Are you pleased to see me?’ he asked his wife, holding her tight.

His need for her, emotionally and physically, was heartrending.

It was the way he held her that was so touching; that need to be close that was so obvious. It was how he hugged her, patted her and smoothed down her hair so she looked nice. 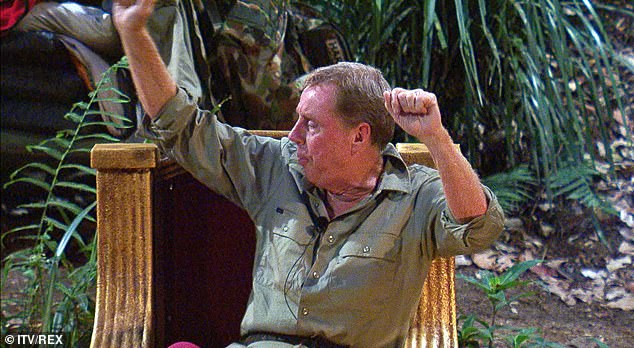 Hot topic: The legendary sporting star is already tipped as the bookies favourite to win, after it was revealed he had made it to the final on Saturday

Most of all it was the way he looked at her; the distilled adoration of a man who has loved his wife for over 50 years, who is unstinting in that love, who loves everything about her, and always will.

Call me soppy, but it was quite beautiful to behold. ‘How are you darling? Are the kids okay?’ he whispered in her ear and wiped away his tears.

Which just goes to show that even in the middle of a hideously contrived reality show such as this, where contestants must undertake ghastly, slime-streaked trials to win food for their camp-mates, you can still strike emotional gold.

Some (mostly men) disagreed, saying it was like watching one of those videos of a family dog being reunited with its soldier owner after the latter returns home following a long tour of duty. Woof, woof, get down, Harry!

Others (mostly women) could only feel the love, perhaps admitting to themselves how much they secretly longed to have a man love them the way Harry loves Sandra.

To be the single most important person in someone else’s life? It is a highly seductive prospect, even for the most determined and independent careerist. 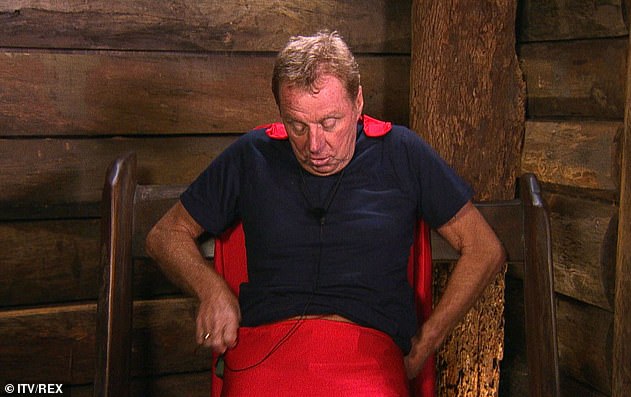 Hilarious: Harry Redknapp left I’m A Celebrity Get Me Out Of Here viewers in hysterics on Saturday night, after he made a hilarious revelation about his wife Sandra’s knickers

We live in a highly emancipated age, when women are strong and self-reliant, capable of starting both companies and families all by ourselves, without the support of a partner. Look at us.

We’re on Tinder, we’re on our way, we’re smashing the glass ceiling and becoming single parents well into our forties. Men, for many women, are becoming a redundant option.

Yet one glimpse of the Redknapps’ vivid and profound relationship, spanning half a century and still going strong, is a reminder of how much the love of a good man (or woman) can feather-bed and enrich a life.

As Nat King Cole once almost sang, perhaps the greatest thing you’ll ever learn, is just to love and be loved in return. (And I bet that is one of the Redknapps’ favourite songs, too.)

Harry first met Sandra at a dance above an East London pub and the couple married shortly afterwards, when they were both 17.

They have two ridiculously handsome sons; Jamie Redknapp, the former Liverpool and England midfielder and now a football pundit, and Mark Redknapp, a model.

During the Bushtucker Trials on the show, Harry, a solid meat and two veg man from Essex, who draws the exotic culinary line at calamari with tartar sauce, ate sheep’s brains and held beach worms, witchetty grubs and a giant burrowing cockroach in his mouth. 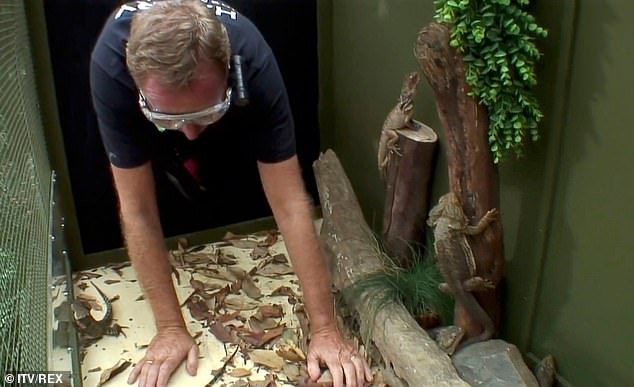 Calm: He doesn’t flinch as he rummages his hand around in boxes in search of the coveted five stars needed for everybody to eat, coming into close contact with lizards on one trial

‘I didn’t want to let my grandchildren down,’ he said, knowing that they would be watching at home.

The Redknapps’ marriage has survived Harry accidentally running over Sandra’s foot in his car (‘It really messed up her ankle’) and on another occasion, destroying her beloved flowerbeds with a jet-wash.

It has also survived the many trials of being a football manager and also his 2012 trial, in which he was found not guilty of tax evasion and receiving offshore bungs.

And how ironic that in the week that the hyped up but brief relationship between Love Island (ITV) winners Jack Fincham and Dani Dyer has abruptly ended, it is Harry and Sandra Redknapp who have emerged as the lovebirds on the top of the reality show tree. 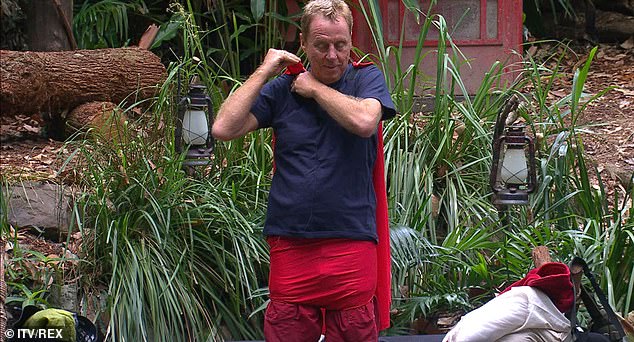 Big money: It comes amid reports that Harry could land some of the biggest ever post-show deals offered to a celebrity, whether or not he is crowned the series winner

(Dani says she dumped Jack because of ‘pressures’ and the fact that he was indiscreet about their sex life.)

Meanwhile, Sandra has just had to put up with Harry telling the nation about the ‘big pants’ she used to wear when they started courting. ‘They came right up to here,’ he said on Saturday night, indicating a point just below his chest.

One never got the sense that Harry entirely understood how I’m A Celebrity worked, or the burning ambition of many of his co-stars to make themselves popular and attract viewer votes.

In the end, he triumphed by just being himself, and not being afraid to speak about his wife, the most important person in his life. He loved to love her — and we loved him for it.