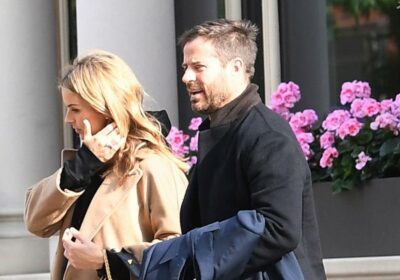 Jamie Redknapp and his new wife Frida Andersson-Lourie have been spotted leaving a lavish hotel in London after their surprise wedding earlier this week.

Football pundit Jamie, 48, and wife Frida, who has already changed her surname on Instagram, were seen leaving the five-star Connaught hotel, where suites cost in excess of £3,000 a night.

Jamie was seen wearing black tracksuit bottoms and a coat of the same colour as he walked alongside his new wife.

He had his navy blue wedding suit draped over his arm as they departed the luxury hotel.

Meanwhile, Frida wore a black pair of leggings and hoodie of the same colour and added a camel coat on top.

The pair wore trainers as they walked along the London street after their surprise wedding.

In the image, Frida's impressive ring can also ben seen as she scoops her hair away from her face.

The pair tied the knot in a small ceremony earlier this week and were pictured leaving Chelsea Registry Office shortly after saying "I do".

Jamie's parents Harry and Sandra Redknapp, who recently shared a glimpse inside the couple's ceremony, were in attendance, alongside Jamie's sons Charlie and Beau, who he shares with ex wife Louise Redknapp.

Former Eternal singer Louise is said to have been "shocked" by Jamie's decision to remarry.

A source recently told OK!: "Louise was quite shocked, she only found out very recently. They kept it very under wraps, nobody even knew they were engaged.

"It's very mixed emotions for her, it's difficult because she's spoken quite openly about her regret. She's blamed Strictly quite a lot but, unfortunately, you can't turn the clock back."

The source added that Louise was only informed of the nuptials because Jamie wanted their sons – Charley, 17, and Beau, 12 – to enter Kensington and Chelsea Register Office with him.

"He wanted his sons to walk in with him but it was a very small affair," they continued. "She only knew because the boys were there.

"She didn't have a lot of time to prepare because Jamie just wanted to be married before the baby was born. He was desperate for them to be man and wife before."

Jamie and Frida are also expecting their first child together, understood to be due to arrive in November.

The couple have kept the details of Frida's pregnancy private, much like their romance as the pair rarely share photos of one another on social media.

Stay up to date with all the latest news on Jamie Redknapp, his new wife Frida and many more of your favourite stars by singing up to our daily OK! newsletter.