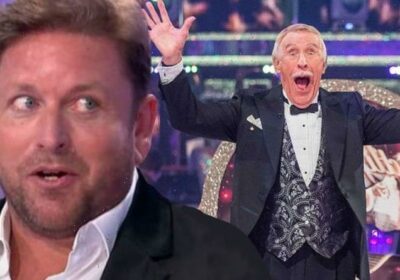 James Martin, 49, revealed he used to hide a sneaky KFC every now and again from Bruce Forsyth when he was taking part on Strictly Come Dancing, in order to prevent the former host, who sadly passed away in 2017 at the age of 89, getting cross that he’d made his car stink of fast food. The celebrity chef took part in the show in 2005, and reminisced on the cheeky trick he pulled on the late presenter.

I had the wet wipes so as to disguise the fact I’d just had a 10 piece bargain bucket!

After deciding KFC won over Burger King and McDonalds, James detailed what he likes to order.

“I have a six chicken bargain bucket,” he said.

After noting they no longer give out the handy wet wipes, he admitted there’s now no hiding the fact you’ve indulged.

With fond memories of the cleaning equipment, he remembered how they helped cover up the fact he used to pick up a KFC while he was doing the BBC talent contest.

“When I did Strictly, they used to send Bruce Forsyth out first and then the car used to come back and pick me up,” he recalled.

“I used to stop off at KFC on the way back and all the way home I had all the windows open, so Bruce’s car wouldn’t smell of it!”

And with the wet wipes, it made it easier for James to cover up his guilty pleasure.

“I had the wet wipes so as to disguise the fact I’d just had a 10 piece bargain bucket!” he laughed.

“Because I’d be in rehearsal in four hours time!”

With the latest series of Strictly just around the corner, Paul admitted he’d been watching some old videos of his pal on the show.

The Saturday Morning star was partnered with Camilla Dallerup in series three of Strictly.

He was still holding down his day job as a chef while doing the show, committing a huge amount of hours to training each week, but despite his dedication he struggled to meet the high technical standards set by other competitors.

His best performance came in the semi-final of week nine, when their Foxtrot routine earned them 33 points from the judges.

However following a difficult Rumba, they ended bottom of the leaderboard where the public vote couldn’t save them to make it through to the final.

They finished fourth out of the 12 couples.

From the clips on YouTube, Paul he couldn’t help but notice what good shape he was in.

“You were trim!” he exclaimed as James nodded.

“I was on it,” he agreed, before joking he’d have taken Paul’s title of GQ’s Chef of the Year if it was a thing at the time.

Saturday Morning airs today at 9:30am on ITV.