Home » Celebrities » Is The Randonautica App Safe? Here’s What To Know About The Latest TikTok Trend The latest TikTok trend is an app called Randonautica, which sends users on a quest using random coordinates. Fans of the app like how it gets you out of the house and out of your normal routine. But since the app leads you to random locations, you may be wondering if the Randonautica app is safe. Here’s what to know before you set out on a mission.

Randonautica launched in February 2020, and it’s gotten a lot of hype in recent months, thanks to TikTokers sharing videos of their adventures. The point of using the app is to embark on an adventure IRL, and users receive a random set of coordinates in their local area to explore. A description of the app on its website refers to it as "the world’s first quantumly generated Choose Your Own Adventure reality game." There are three different types of locations to choose from — an attractor, a void, or an anomaly — each of which will give you a specific type of destination.

You can set your distance in meters to control how far away your destination is, then select your location type. You can see how many feet or miles the distance is by using Google conversions or a measurement converter app. Next, you’ll choose ANU — which stands for Australian National University’s Quantum random number generator — or Temporal, which controls how you’ll get your randomly generated coordinates, and then the app asks you to set your "intention" for your quest. This means stating aloud what you’d like to see at your destination with the idea that your mind will affect your location. Even with an intention set, there is no guarantee of what you’ll see at your destination. When you’re ready, hit "Start," and wait for the app to generate your coordinates. Then, hit "Navigate" and the coordinates will come up on Google Maps.

If you’ve seen the videos on TikTok showing people winding up in unsafe locations or on private property, you may have concerns about how safe the app actually is. Some users have had very unpleasant experiences, including a group of teens in Seattle, Washington, who discovered human remains in a black suitcase on June 19. When BuzzFeed News asked Randonautica about the safety of the app after the Seattle incident, a Randonautica spokesperson called the event a "very unfortunate coincidence." The spokesperson also told the publication, "Our first reaction was to reach out to the teenagers to make sure they were doing alright. We sent a message letting them know the intention of Randonautica is not to find something disturbing like this." 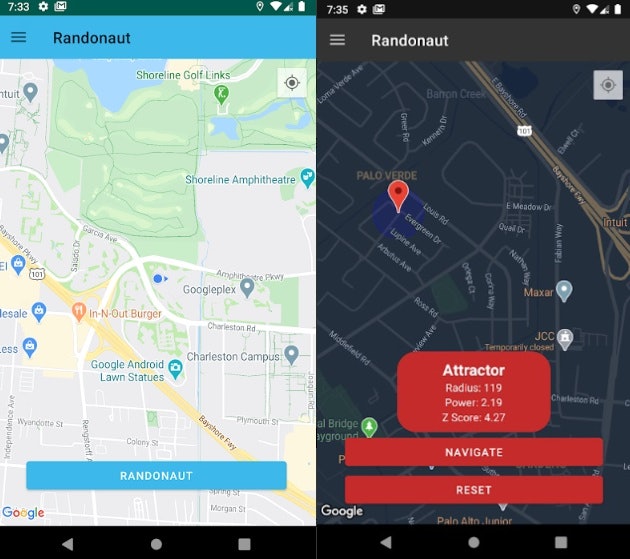 To dig into the safety aspect, you should first know how the app works. Randonautica uses quantum numbers — which are numbers used in quantum physics to describe the energy levels of atoms and molecules — to generate random coordinates, which are what you follow to get to your destination. Since the coordinates are random, the app doesn’t know where you’re headed, and it may send you to private property or even generate a coordinate in a body of water. Randonautica’s FAQ page makes it clear there’s no way to control where the coordinates will be, as the website explains, "In order to ensure that points are random, we do not impose restrictions on where points may generate." In the privacy policy within the app — which comes up on your screen as soon as you open it for the first time — Randonautica asks that you don’t trespass or do anything you feel is unsafe or risky while exploring.

A Randonautica spokesperson tells Elite Daily, "Randonauts are supposed to be responsible, use situational awareness, never trespass or travel into dangerous areas like near train tracks, restricted zones, etc." The company also strongly encourages using the app during daylight hours, rather than when it’s dark, because you may end up in an unfamiliar area. "Randonauts can take extra precautions by looking at the point on Google Maps prior to adventuring to it. We want people to know that they don’t have to go onto the precise point," the company says. Basically, trust your intuition and make your way back home if you ever feel uncomfortable with where your quest is going.

As for keeping your personal information safe with how Randonautica uses your data and location information, according to the Privacy Policy, the app doesn’t collect user data, and the only thing it stores on the server is user reports and the destination coordinates. Your starting point is never saved. You don’t even need to create an account to use Randonautica, so it’s completely anonymous. Its privacy policy within the app also states nothing is ever shared with third-party services.

If exploring near your home sounds like a fun way to spice up your day without traveling too far, you can download Randonautica for yourself from the App Store or Google Play. What Is Randonautica? The Bizarre App Is The Latest Craze On TikTok Why Are Spotify, TikTok, & Other Apps Down On iOS? There’s A Reported Issue For Some Users