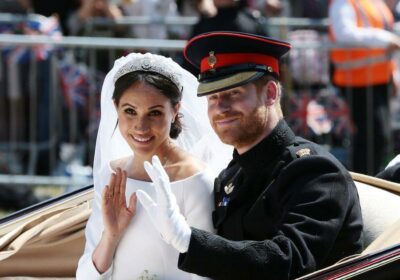 Today marks four years since the nation came together to celebrate as the Duke and Duchess of Sussex walked down the aisle.

Prince Harry and his bride Meghan Markle tied the knot during a lavish ceremony on May 19, 2018, with the world watching. At the time they were at the very heart of the royal family and fulltime working royals – a role they would later take a step back from when they left the UK for a life overseas in January 2020.

It later emerged that despite the happy wedding scenes, there was already some upset behind the scenes, if reports are to be believed.

In November 2018, just days after the couple returned from their successful tour to Australia, it was reported Meghan had thrown a ‘tiara tantrum’ shortly before her wedding. This was said to be because the tiara she wanted to wear was not available. Prince Harry was reportedly "irate" when his fiance did not get what she wanted.

Andrew Morton, author of Meghan: A Hollywood Princess, later wrote: "The Queen’s formidable dresser Angela Kelly, who is the guardian of Her Majesty’s jewellery, is said to have informed the irate Prince that certain security protocols had to be adhered to in order to access the priceless piece.

"Harry would have none of it, telling anyone who would listen: ‘What Meghan wants, Meghan gets.’ His ringing phrase did her no favours."

Reportedly, Meghan originally wanted to have a tiara that featured emeralds. It is thought this may have been the one Princess Eugenie sported for her wedding in October 2018.

In the end, Meghan wore the Queen Mary Diamond Bandeau on her wedding day.

Whatever the truth of the tiara report, Meghan showed no sign of any upset on her wedding day, with the stunning bride appearing genuinely happy on the special occasion.

It was two years later, in 2020 that Harry and Meghan announced they were stepping back as senior royals.

Initially, the couple relocated to Canada before settling in California where they are now living with their son Archie and daughter Lilibet.

Since the initial move, Harry has only returned to the UK on two occasions while his wife and children have yet to visit.

The royal brothers reunited at Prince Phillip's funeral as well as at the unveiling of a statue of their mother, Princess Diana, on what would have been her 60th birthday.

For all the latest Royal news, sign up to our daily newsletter here.