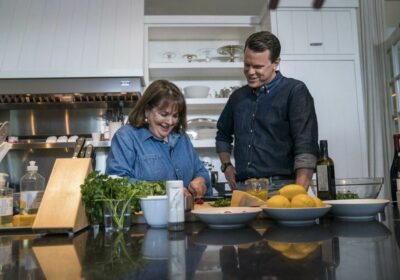 Back in the early days of the Barefoot Contessa cooking show, Ina Garten would film the show in her home’s kitchen. It proved to be challenging for Garten and her husband, Jeffrey, however, because it was so intrusive. She eventually had a space built just for filming the show — in part, she joked, because “Jeffrey was going to divorce me.”

Ina Garten had to move her cooking show to the barn

In an April interview with Oprah Daily, Garten explained the motivation behind her barn kitchen, where she films the Barefoot Contessa cooking show. In the show’s humble beginnings, the film crew would come into her kitchen, but that meant occupying her home.

The Gartens wanted the neighboring land by their East Hampton home for years, but had to wait until the neighbor was open to selling it.

“Every year for 10 years, I wrote to the man who owned the property and asked if he’d consider selling,” Garten shared. “And every time, he’d write back saying ‘no.’” In 2006, however, he changed his tune and the Gartens were able to purchase the land.

Garten knew that she needed to have a space for testing her cookbook recipes and filming Barefoot Contessa. “We were filming for eight weeks straight, twice a year, and during that time, the crew took over the entire house, which meant Jeffrey and I practically lived in our bedroom,” she explained.

“I knew that either Jeffrey was going to divorce me or I was going to have to find some other place to film,” Garten added.

The 2,000-square-foot barn is perfectly designed for Garten’s needs, but it has something very unique — a duplicate of the kitchen so her two assistants have the same setup for cooking and testing.

“Remember this is a place where at least two people work,” she explained. “So we took my kitchen and did it twice: We each have our own refrigerator and stove, and we have duplicates of every pot, pan, and spoon.”

“It’s just beyond my wildest dreams,” Garten added. “Every day, I walk in here and think, I can’t believe I work here.”

Ina Garten has specific rules for her workspace

Garten’s kitchen is definitely a dream and very carefully designed to her specifications for traffic flow and her workspace.

During a 2009 interview with House Beautiful, Garten shed some light on the setup that works best for her.

“I think the most important thing is that the workspace isn’t too big,” Garten explained. “That it’s a space that you can actually handle easily.” She also shared her preference for keeping her workspace out of the traffic area while still allowing her the opportunity to interact with guests.

Garten’s workspace is out of the main area, she explained, “so that if there are people — you know kids and dogs and friends — and running back and forth, they’re not underfoot when I’m working.”

She provides enough space for people to sit on the other side of the counter, by the fire, or at the table, however. It’s the perfect blend of having a place to entertain while being able to work without people interfering with her cooking area.