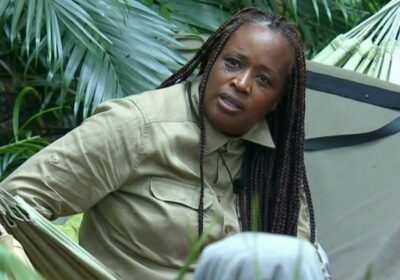 I'm A Celebrity star Charlene White has finally confessed the real reason she doesn't want to sleep in the RV with Matt Hancock – and it has nothing to do with spiders.

After being appointed as Matt Hancock's deputy leader in the camp, the pair bagged the comfortable beds while the rest of the contestants had no choice but to sleep outside.

Charlene, 42, refused to sleep in the RV, however, after spotting a spider in there – leaving many of her fellow stars frustrated – including Seann Walsh, 36, whose back suffered while sleeping in the hammock.

Now, on Friday night's episode of the hit ITV show, the Loose Women panellist has finally confessed the real reason she refuses to sleep in the bed inside the RV.

Speaking to Sue Cleaver, 59, she shared: “I’m an impartial journalist, I can’t be sharing a room with a sitting MP because that just doesn’t sit well with me impartiality wise. And I just think, if he were ever to become minister again how can I sit and question him about anything when I’ve shared a room with him?”

Sue in the Bush Telegraph added: “I absolutely see her point. When Charlene was talking about having to have impartiality being a newsreader it made total sense to me why it wouldn’t be great for her to be in an RV with Matt. Awkward.”

Charlene went on: “I would say that every conversation we’ve had that Matt’s been here constantly involves me doing calculations in my head about impartiality and making sure it doesn’t go too much in one direction.

"Constantly thinking about those guidelines and the broadcasting rules. It’s a constant thing that’s in my head on a daily basis.”

She added: “He gets it. He understands it. He understands my job. It’s just a bizarre situation, but that’s how I live my life on a daily basis. On Loose I have to do it. That’s why I can only ever be host, I can’t be ‘panel’. If you are on the panel you are giving your personal opinion on stories. I am helping conduct and facilitating that debate while posing questions of the panel whilst providing impartiality. If they are going too far in one direction I can pull them back because I have the facts and figures in my head because of my day job. Then all you get is a load of tweets from viewers saying, ‘I knew she was a Boris lover. I knew it!’”

Fans have since flocked to Twitter to share their thoughts on the exchange as one person wrote: "You would think Charlene has to actually sleep in the same bed as Matt".

Another shared: "Ah yes… Charlene’s journalistic integrity and impartiality that goes out the window when she’s sl*gging off Matt at every opportunity…#imaceleb".

While a third added: "So, it's ok for Charlene to sit in close proximity, chatting to Matt all day but she can't sleep in similar proximity to him in silence?"

But not everyone was as critical as many jumped to her defence, with one person commenting: "I mean who can really blame Charlene for not wanting to share a room with Matt Hancock but she should have just admitted that was the reason days ago".

"why u all complaining abt charlene not wanting to shave the rv, i wouldn’t want to share one w matt either," added another.