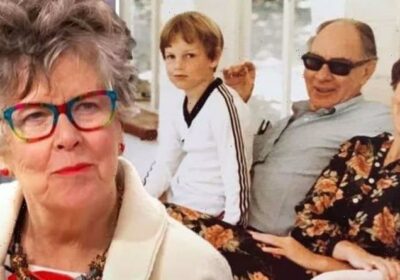 The Great British Bake Off judge Prue Leith, 81, has revealed her struggles after her first husband, Rayne Kruger, died in 2002. The Channel 4 star explained that she had “no friends” to reach out to following the author’s death.

Prue has previously spoken candidly about her “secret love affair” with Rayne, a South African author and property developer, who she married in 1974 and had her son Daniel Kruger, now 46, with.

Rayne was the husband of “family friend” Nan Munro, who was reported to be Prue’s mother’s best pal.

The Bake Off judge has now opened up about their marriage, saying she loved her first husband “to bits” despite him being a “recluse”.

“My first husband was so different. He was a writer, a recluse, he never wanted to see anybody,” Prue explained. “But I’m quite gregarious so that could have been a problem but it wasn’t.”

She continued: “I was in London three days a week. I was living a very gregarious life in London because I was a restaurateur.

“I was very busy with business stuff but I had tons of friends in London and a very sociable life that [my husband] didn’t really care for.

“When I went home for the weekends all I wanted was to have scrambled eggs in front of the TV. I was really tired by the end of the week. It all worked perfectly.”

The small screen regular explained that she became aware she had no friends in the couple’s local area as they hadn’t spoken to their neighbours in the village.

“But what I hadn’t realised was that when he died I would have no friends,” Prue remarked. “Because we didn’t know any of the neighbours.”

She continued: “He never wanted to know any of the neighbours. He really was quite reclusive. He liked his own friends, a few that he had for years. He liked the family to come around.

“Apart from that, I didn’t really know anyone.”

She went on: “I knew some women because I had not wanted to be one of those people that lived in the country and took no notice of village life.

“I would help with flowers for the church or for the Women’s Institute I would make jam.

“I would try but because I was busy I wasn’t very good at it.”

“So when he died I was really, really lonely. I just worked harder but I was miserable because my husband had died,” Prue finished.

It wasn’t until 2020 that the couple bought their first home together and moved in together nine years into their relationship.

The Bake Off judge explained that it was so the couple could have “personal space,” and then enjoy “quality time” together.