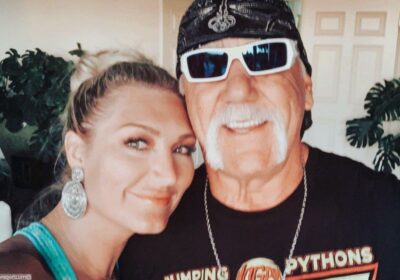 According to daughter Brooke, the WWE Hall of Famer is still ‘chugging along’ after 25 surgeries and stayed ‘so graceful’ dealing with backlash over N-word scandal years ago.

AceShowbiz –Hulk Hogan has had 25 surgeries over the past decade, according to his daughter Brooke.

The WWE Hall of Famer’s daughter has revealed her famous dad’s long injury list, including a battle with MRSA last year.

Appearing on the Hollywood Raw podcast, she said, “We counted how many surgeries he’s had in the last 10 years and I think we’re at 25. He’s had both shoulders scoped and he had his whole bicep and his bursa sac and everything tied up in his shoulder last year.”

“That was a disaster. He got MRSA and it was like a big thing. So we had to go back and undo tons of physical therapy. He’s had both of his knees replaced multiple times, I think twice on both. He’s had his hips done. He’s had his elbow scope.”

However, she suggested his most recent surgery might be “the winning ticket” for his health.

She added, “So yeah, he’s had so many surgeries, so he’s done a ton, but this last one that he just had finally was like the winning ticket. So right now, he’s feeling great. He’s working out two hours in the gym every day. He’s still chugging along.”

In 2018, Hogan was reinstated into the WWE Hall of Fame and welcomed back to the company he was barred from in 2015, following the release of a transcript made from a sex tape recorded without his consent back in 2007, in which he used the ‘N-word’ during a conversation about his daughter’s then-boyfriend.

Now, Brooke has opened up on how her dad has dealt with his scandals.

She said, “Our family has been through a lot of crap, and I will say, my dad, it’s hard to have all your skeletons pulled out of your closet and just waved in front of everybody’s face and humiliated to the world. And then our family just goes through all this stuff.”

“You just can’t ever throw shade back because then it just makes you look worse.”